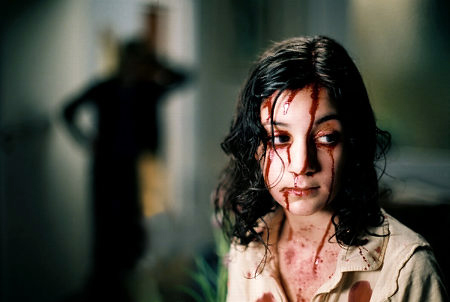 Confined to the airbrushed, formulaic realms of Hollywood, vampirism has, essentially speaking, been drained of its capacity to horrify. Frequently de-fanged, corset-bound and peddled as the stuff of preteen sexual fantasy, this bloodstained legacy is, at long last, reanimated by the pioneering efforts of Swedish director, Tomas Alfredson. Adapted from John Ajvide Lindqvist’s acclaimed novel, Let The Right One In is at once a savagely beautiful reworking of the genre and heartrending tale of isolation. An American re-make of this subtitled treasure is already in motion, bearing the rather unimaginative namesake, Let Me In. Doubtless, the glittering trappings of mainstream production will reduce this gritty masterpiece to a slick, though ultimately soulless affair.

By turns sombre and extraordinary, a series of sinister events unfold within the uniformly bland confines of Stockholm-based dormitory town, Blackeberg. Alongside this grimy, characterless backdrop, the region’s snow-laden beauty is vividly enhanced. With close-up shots of aptly crimson-hued berries and nocturnal scenes in which the landscape adopts an eerie luminosity, Let The Right One In is haunting in visual and psychological terms alike. Amid this inhospitable scene of bleak midwinter, the unhappy existence of twelve-year-old serial misfit, Oskar (Kare Hedebrant) is documented with harsh, faintly voyeuristic realism. The hapless boy’s miserable life takes an unexpectedly intriguing turn following his encounter with the beguiling, urchin-like Eli (Lina Leandersson). As Oskar’s attachment to his newfound friend intensifies, Eli’s bloodlust is inevitably unveiled.  A trail of fast-paced carnage ensues, yielding devastating and darkly comedic consequences.

From random decapitation to a surreal, feline attack scene, Alfredson’s approach to horror movie gore is an agreeably depraved departure from the American, blood-soaked archetype. Poignant in equal measure, Lindqvist’s captivating account of alienation is stunningly realised by Hedebrant’s uncannily organic performance as Oskar. With his Scandinavian pallor and timid mannerisms, the young actor exudes an authentic aura of fragility, even when virtually motionless. As such, Hedebrant’s tenderness interplays explosively with Leandersson’s gloriously inhumane interpretation of Eli.

As a 200-year-old vampire frozen forever in adolescent form, her unmistakably mature composure is horrifying yet sufficiently understated to avoid overblown exaggeration. While Eli’s lack of emotion is something of a vampiric calling card, it is, moreover, painfully tragic as we witness her receive Oskar’s heartfelt embrace and offer of sweets with icy indifference. Shunning sunlight, occasionally foul-smelling and predatory, Eli encompasses the modern world’s most faithful depiction of vampire lore since Nosferatu first stalked the silver screen in 1922.