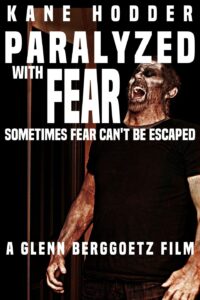 Glenn Berggoetz’s PARALYZED WITH FEAR starring Kane Hodder, Haidyn,Harvey, and Andrea Rabold has been acquired by Bayview Entertainment. Sometimes Fear Can’t Be Escaped… This is the official trailer.

When Chemock, a 15th-century demon, is unwittingly unleashed upon a household of women, Chemock begins to terrorize the women one by one. As Chemock’s power grows, the amount of carnage he inflicts also grows, and he eventually does battle not only with the women, but also with a belligerent preacher.

About BayView Entertainment
BayView Entertainment, LLC, is a full service media company committed to acquire, develop, produce, market and distribute audio-visual content. For over fifteen years, BayView made its name by being dedicated to releasing only the best programs in each category from some of the most trusted names in the field.

BayView’s disc programming can be found throughout the country at all online suppliers plus fine brick & mortar retailers, as well as streaming/video on demand at all major digital retailers and platforms.