An Interview with Bill Oberst Jr. 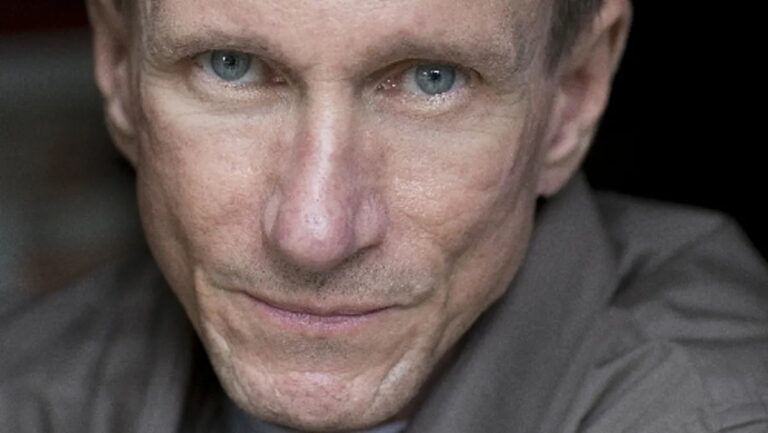 This week we spoke with Mr creepy torso actor himself Bill Oberst Jr., star of horror after horror! Check out our interview below with Bill where he talks all about the latest and greatest horror projects he’s currently involved in including Brandon Slagle ‘Vivid’ and the Gabriel Sabloff helmed ‘The Last Supper’!

Hey Bill, It seems that you have an unbelievable schedule of work coming up so thank you very much for taking the time out to chat with us. Can you tell us a little about some of those projects?
First off, greetings from Los Angeles and I’d like to give a shout-out to UK horror fans. My stepmum is British and has a flat in London so I’m over a bit…have step-bothers and sisters in the UK. I quite like the flavor of UK horror, and hope to work on a film there soon. I do work a lot, a blessing in an industry with a 97% unemployment rate. I’m lucky that I have a distinct look (I’m a tad unsettling on camera) or I’d be just another skinny white guy in Hollywood. I have 7 films in post-production right now and 5 of them are horror flicks:

* A lead role in The Asylum’s feature film A HAUNTING IN SALEM, a ghost story set in Salem, Massachusetts where I am the new Sheriff battling Salem’s old evils (release date August 23)

* A lead role in SOMETHING WICKED DWELLS from Green Ghost Films, a black & white gothic horror piece set in an ancient dungeon where chained prisoners wait to be dragged to Hell’s gallows (based on Waide Riddle’s dark poem of the same name)

* And a cameo in director Brandon Slagle’s VIVID starring Devanny Pinn, about a serial killer who wants to know what it is like to live and die as other people so he places his consciousness into theirs.

Could you tell us a little more about your ‘mysterious’ character in the upcoming Brandon Slagle project ‘Vivid’?
I actually based the character on one in Michael Caine’s HARRY BROWN. I am a huge Caine fan and HARRY BROWN just blew me away; both Caine’s performance and that of Sean Harris as Stretch. I thought him absolutely brilliant in that role, and when Brandon Slagle approached me to do a cameo in VIVID as a nightmarish drug dealer I suggested emulating Sean Harris’ look as Stretch, shirtless and emaciated with all the body scarification, which Brandon loved. The make-up artist who did me that day worked from HARRY BROWN stills. Brandon added the element of my character crawling around like a spider, which topped it off nicely.

Horror seems to be something you are drawn to. What do you particularly enjoy about working in the genre?
I am a follower of Jesus of Nazareth, and I really believe that there are unseen forces at work in the world; both for good and evil. I believe that we can open ourselves up to either or, as most of us do, to a mixture of the two. Horror is cathartic because it allows us to play out these ancient morality tales in a safe place. Good horror lets us face the darkness and stare into the abyss of what we are capable of without a compass. I love playing the darkness as a way to point out the existence of the light. Besides, with this face, if I waited for romantic leads I’d never work! I’m quite happy in horror, and I do make the occasional foray out of the genre; I did a lead as an Amish farmer in The Hallmark Channel’s THE SHUNNING earlier this year. It was fun, although a bit unusual for the likes of me!

Would you ever consider moving behind the camera if an opportunity to do so arose in the future? Or perhaps even writing your own horror flick?
Yes and yes. I’ve just formed a production company with Seth Metoyer, a writer and webmaster at MoreHorror.com. We are looking for stories that focus on the intersection of horror and spirituality. The original EXORCIST, for example, was so scary because it took equally seriously both the forces of good and the forces of evil. That’s the kind of project I am interested in, horror that touches the soul and is truly disturbing, rather than yet another slasher flick.

Could you fill us in a little bit more about your demonic part opposite veteran actor Robert Loggia in the Gabriel Sabloff helmed ‘The Last Supper’?
Thank you for asking about that. I was hired to play a demon who taunts Robert Loggia as the Apostle Peter in his jail cell in ancient Rome. It’s a Biblical film, which was very unusual for me, although the demon territory was quite familiar turf. There’s a post on my blog that talks about the experience, if anyone is interested. My look as the demon was toned down from the original concept, since it will be a family film, but I still think he is deliciously evil-looking.

Which actors have influenced you during your career and who would you most like to star opposite on screen if you had the chance?
Many of the actors I’d most like to work with are dead; with the exception of Michael Caine, Ian McClellan and Christopher Lee. I missed out on Lon Chaney Sr., Peter Cushing, Michael Gough, Boris Karloff, Vincent Price and a dozen other horror heroes. I did legitimate stage for 12 years before coming to Los Angeles to switch to film 3 years ago, so John Gielgud and Laurence Olivier and Kenneth Branagh are also heroes. Working with Robert Loggia was a dream, and an education. But there are brilliant actors working right now whose names I don’t even know and if fortune smiles on me I’ll get to work with them and they’ll become my heroes, too. That’s what I love about my profession; amazing talent is everywhere. I’m a lucky fellow to have been able to make my living as an actor for 15 years.
Blessed and lucky.

Is horror a genre you enjoy watching? And if so, what sort of horror movies scares you personally?
I have always loved horror, and my sympathies have always been with the monster. I enjoy horror that surprises me. INSIDIOUS scared me. The original EVIL DEAD and NIGHTMARE ON ELM STREET scared me. LET THE RIGHT ONE IN scared me. When I was 6 I saw Richard Matheson’s original THE NIGHT STALKER on TV and the memory never left me, nor did the vision of those twins in the hallway in THE SHINING. I’ve never been much on slasher films – I am more freaked out a noise in the dark at 3am than any sort of body mutilation or blood. The imagination can create unspeakable terrors but it has to be given room and space in which to do it.

What can Bill Oberst Jr. fans expect from you in the future?
Should I have any fans, I’d say that they can expect to be disturbed, as I seem to have a propensity for doing that. I’d love to hear from writers, actors and fans of the genre anytime. Hit me on Facebook or on Twitter. I believe that the great new iconic horror films are waiting to be made; and the ideas for them are out there. Thank you for letting me speak with you and your readers. I truly love the site!

“Thank you ever so much for taking part in this interview Bill.
And we wish you the very best of luck in the future.”