An Interview with Doug Hawley 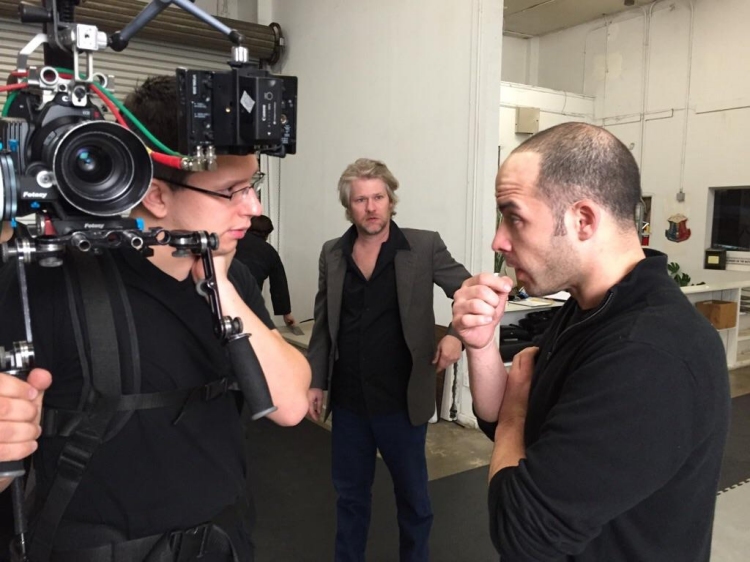 Doug Hawley may be one heck of a busy filmmaker right now but the ‘Alamo Downs’ and ‘Cursed World Problems’ director has managed to squeeze us in for a little time to tell us all about his inspirations, his future plans and of course his latest project ‘Red Christmas’.

How did you get involved in the film making process and was it always something you were interested in?
As far back as I can remember I’ve had a fixation with movies. I started making little camcorder shorts with my buddies when I was in elementary school and that continued all the way up until high school. I was a fairly active kid with extra-curricular activities but movies were really the only thing I was truly passionate about. So when it came time for college I decided to pursue film studies at the University of Toledo in Ohio.

What was the inspiration behind your new horror short ‘Red Christmas’ and how did the idea come about?
The inspiration for ‘Red Christmas’ came from working a day job in an office with an absolutely deplorable person. It was quickly realized that we couldn’t feed said person to a zombie in reality so it was decided to make a short film about it instead.

What inspires you generally in your filmmaking career and is horror a genre you are personally drawn to?
I’m inspired by emotion, that’s usually where I start even before I begin writing. I have an idea of what I want the project feel like and then try to craft the movie around that. What attracts me to the horror genre is that the emotional beats are vast and numerous, and juxtaposing those beats with humor as we did with ‘Red Christmas’ is something I’m drawn to.

Do you have any particular horror movie favorites?
Way too many to name. But, a recent favorite would be Julia Ducournau’s ‘Raw’ which I thought was a fucking blast.

With a number of shorts already under your belt do you believe any of your projects or past works could be expanded into a full length feature?
A short we are finishing the post-production on called ‘Alamo Downs’ which is about a low-rent bounty hunter operating out of the armpit of the San Fernando Valley certainly has feature potential. I envision it as sort of a low-stakes noir film.

Do you see yourself working on full length movies in the future or do you have other creative avenues you would like to explore?
A feature is what we’re aiming towards. Have script, will travel.

Do you feel that making shorts in the genre has helped you grow as a director?
Absolutely. I see these short films as creative shakedowns for myself and my collaborators as we ramp up towards the next plateau, which in our case would be a feature length project.

Are you able to tell us a little more about your other projects such as action comedy ‘Alamo Downs’, starring Todd Lowe (‘True Blood’) and horror comedy ‘Cursed World Problems’?
Sure! After seeing ‘Red Christmas’, a producer acquaintance came to me with the idea of making some sort of martial arts type short with Todd. There was a location and some ideas about choreography but not much more than that. I thought it might be fun to make something that paid homage to the type of action or martial arts movies that Canon Films put out in the eighties, albeit ‘Alamo Downs’ has it’s tongue firmly placed in cheek. So I imagined the character of Alamo Downs as this washed up, booze soaked bounty hunter who falls ass backwards into a dubious karate dojo filled with low lives.

‘Cursed World Problems’ is about an expecting couple who learn that there is a deadly gypsy curse on the family and their unborn child is in grave danger. If child endangerment is not a scenario ripe with comedic possibilities, then I’m not sure what is.

“Thank you ever so much for taking part in this interview Doug.
And we wish you the very best of luck in the future.”