An Interview with Todd Lincoln 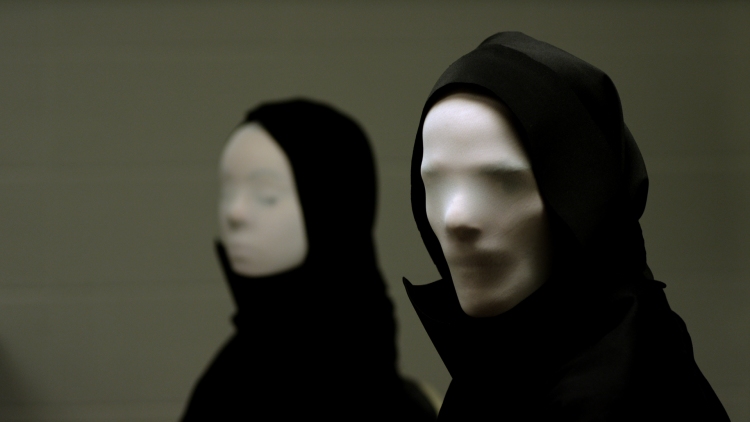 “Gorgeous Vortex” is the secret surprise final segment of “V/H/S: Viral” from Magnolia Pictures. “Gorgeous Vortex” plays at the very end of “V/H/S: Viral” directly after the end credits. It comes in as a secret surprise transmission. Its available now to buy on Blu-Ray and DVD and from iTunes, and we’ve been chatting with director Todd Lincoln about his special segment.

Gorgeous Vortex felt like a mix of a hyper-stylised music video and a sado-masochistic serial killer film. I wondered where the idea came from and if it was one you’d had in your head for a while?
Thank you. I’ll take that as a compliment. I can’t explain where most of my ideas come from. I simply shoot the things that I want to see or that I think others should see. A lot of “Gorgeous Vortex” is made up of various concepts and imagery that I’d been storing up for a while that began to connect in surprising ways. I wanted to take the V/H/S franchise in a different direction both tonally and stylistically. “Gorgeous Vortex” was planned as a no-dialogue, experimental, high fashion horror film. It’s meant to be purposely disruptive and divisive. It’s definitely not “found footage”. Perhaps it’s an assemblage of memories, dreams, simulations and surveillance. Or maybe it’s from another time or dimension. My editor, Ed Cardenas and I took a kind of Dadaist or Burroughs-esque cut-up approach to the narrative drive. While shooting “Gorgeous Vortex” I kept thinking of Walter Murch’s quote about working with George Lucas on THX-1138. Murch said, “What we were interested in doing was making a film from the future rather than about the future.”

There seemed to be a David Lynch element to the film with the cryptic, subversive feel to everything. Was there any particular influence on your writing and directing processes?
“Gorgeous Vortex” was partly inspired by avante-garde video artists, fashion photography, old Italian Horror movies, George Lucas’s early experimental films, and the writings of J.G. Ballard and Jean Baudrillard. A while back I became interested in merging visual elements of fashion photography and horror films. “Gorgeous Vortex” was the perfect fit to advance that style. I wanted to create a visceral, visual onslaught served up in a post-human way. “Gorgeous Vortex” is like an evil puzzle. Purposely coded and cursed. There’s a great sadness and darkness to this film. It’s best to leave it up to personal interpretation.

How did you cast the film? There’s a very specific look.
“Gorgeous Vortex” was shot entirely in my hometown of Tulsa, Oklahoma. Almost all of the actors and models are from Tulsa and surrounding areas. The lead actress / model, Jayden Robison flew in from NYC, but her family used to live in Tulsa. It’s also intentional that all of the models have long hair and somewhat similar measurements. There were some amazing top name models / actresses who approached us, wanting to play the lead. But for this film I wanted to find a fresh face. My casting director and I came across Jayden Robison who had a really striking look. Once I spoke with her I discovered that she really understood the role and connected with it. She was ready to give it everything she had. She possessed a beautiful combination of strength, fierceness and vulnerability that brought unexpected layers to the role.

Without giving too much away could you talk about the impressive practical effects?
I’m a huge fan of practical effects and try use them whenever possible. I was excited to get Vincent Guastini and his power team at V.G.P. Effects & Design Studio to come on board. For “Gorgeous Vortex”, Vincent assembled some of the best creature effects artists, sculptors and technicians around… including Joshua Ballze, Josh Wasylink, Mike Rotella, Steve Winsett and Evan Campbell. They went above and beyond on the creature design and operated it beautifully. It was so damn cool to see it come to life. Creature effects artists have always been some of my favorite people to hang out with both on and off the set.

The soundtrack certainly compliments what’s on screen. There’s a malevolent, haunting quality to it that feels relentless.
That’s a great way to describe it. My composer, Joseph Bishara (The Conjuring, Insidious 1 & 2, Annabelle) further elevated “Gorgeous Vortex” with his sophisticated, original score. He also recently released the soundtrack album on vinyl and digital download. http://shop.voidrecordings.com/

What drew you to contributing to V/H/S Viral and how did your submission process work?
It’s funny how I got involved. One of the V/H/S producers approached me while I was devouring cookies in the Topanga Canyon mall. He told me they were doing a third V/H/S film… and asked if I had any ideas. So I started listing off my wishlist of directors that I thought he should get for the new lineup. Haha. I was in fan mode, producer mode and mall mode. And he said, “no man… what would YOU do as director with V/H/S?” I went home and quickly fleshed out three different concepts that I sent to him and the other producers. They chose “Gorgeous Vortex” and I was immediately in pre-production.

Your section is to appear as a bonus feature. Was it disappointing not to be included in the main body of the film or do you think this enhances the reputation of Gorgeous Vortex as something different from the rest?
“Gorgeous Vortex” was planned as the secret final V/H/S film for the hardcore fans and the true diggers. It hints at a larger mythology and points to a new direction for the “V/H/S” franchise. Its positioning on the Blu-Ray / DVD is a throwback to the way that 90’s CD’s for bands such as Nine Inch Nails, Nirvana and Ministry would have a hidden track after the end of the album. “Gorgeous Vortex” plays as an ominous transmission after the end credits of “V/H/S: Viral”. This release plan seems to have complimented and enhanced the mystery and power of the film.

Horror shorts have always been hugely popular on the festival circuit but it seems only recently they’re getting more mainstream attention. What do you think draws directors to the short film format and why do you think the interest is growing?
Well everything comes in cycles. But the popularity of this latest wave of anthologies is probably helped out by peoples’ increasingly shorter attention spans and too many options in our digital queues. These V/H/S cinema snacks are a perfect fit for a new generation raised on YouTube clips, apps, micro-games and mash-ups. Also, audiences are starving for something different than what they’re getting from most studio horror features. For directors these segments are a fun testing ground that get you back to your roots and push you beyond into uncharted territories. The V/H/S films are like cool mix-tapes or sampler albums for a new wave of horror. Allowing you to see behind the curtain into the possible future of the genre and pick your poison.

What will we see next from you?
I’m currently writing a new feature. It’s a Psychosexual Sci-Fi Thriller. I’m also exploring new forms of storytelling and world-building in other mediums such as real-time mobile augmented reality. In the meantime, everyone should keep checking up on www.gorgeousvortex.com for new side-story micro-films that tie in with “Gorgeous Vortex”.