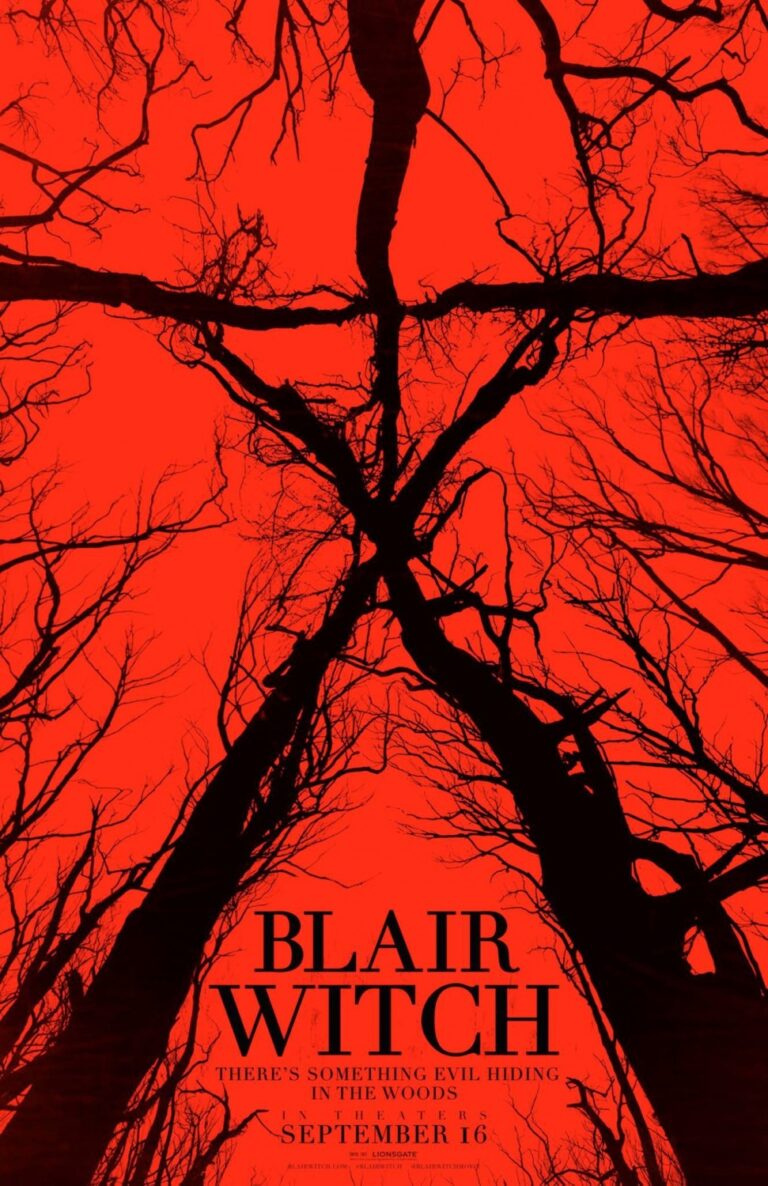 James Allen McCune plays the brother of one of the three unlucky student filmmakers who ventured into the woods near Burkittsville in search of the legendary Blair Witch…and never came back. McCune, along with several buddies will venture to those woods now some fifteen years later, as there is supposedly a chance his sister is still alive. Cue the alleged spooky stuff happening. Well, eventually anyway.

Whether it has great re-watch value or not, 1999’s “Blair Witch Project” did its job the first time around. It was 99.99% build-up, but the first time I saw it I was at least nervous that something could happen at any given moment, and the ending is very effective. I admired the filmmakers for coming up with something relatively fresh at the time. Then a sequel was made that did everything wrong and no one seems to want to admit that the first film was any good anymore. The brand name was tarnished somewhat. Now comes this 2016 film from filmmaker Adam Wingard (whose “You’re Next” was genuinely good) that is a kinda sorta sequel involving a supposed relative of one of the characters in the first film. Scripted by Simon Barrett (“Dead Birds”, “Red Sands”, “You’re Next”), I wish I could say that it restores some prestige to the “Blair Witch” name, but it’s actually one of the worst films of its year.

For starters, as with a lot of ‘found footage’ films, the filmmakers are incompetent and shoot themselves in the foot early on. Firstly, we get a corny title card giving us the same basic thing as the original, but with a 2016 technological upgrade. Then I notice the quite recognisable James Allen McCune, or as I called him when I spotted him: That creepy older dude Debbie wanted to hook up with on “Shameless”. 5 minutes in and the central conceit has completely failed. Did no one involved watch the first film? At least those actors were new to me. More importantly, they didn’t seem like they were acting in a fictional film. The same cannot be said of anyone in this film. These people are nothing other than actors playing pretend, though ironically enough McCune is the best actor of the bunch by a country mile. That’s fine for a normal horror film where you suspend disbelief for 90 minutes. A ‘found footage’ flick however, must go the extra mile in convincing you that what you are seeing is real, even though you know it’s not because you’ve consciously decided to watch a fictional film in the first place. Still, it’s a small but important thing that a film like this absolutely must get right or else the whole thing collapses. It’s fundamental, and the makers of the original seemed to get it. Wingard…he don’t get it.

The jerky editing is not only infuriating but even though it doesn’t go against the rules, it does take you out of the faux ‘reality’ as well. The original’s footage felt ‘as is’, this feels like it’s already been edited in post-production. I know you don’t want to do things exactly the same way as the original, but this just doesn’t begin to work and Wingard seems to have completely missed the point.

If I can neither buy into the faux-reality of a 'found footage' film nor find any of the characters remotely interesting, a film is pretty much dead within minutes for me. That's definitely the case here. Watch the original again instead. It may no longer hold any surprises, but at least it knew how to make its central conceit work. It kept things simple, for a start. Very disappointing, Mr. Wingard. A failure on every level.