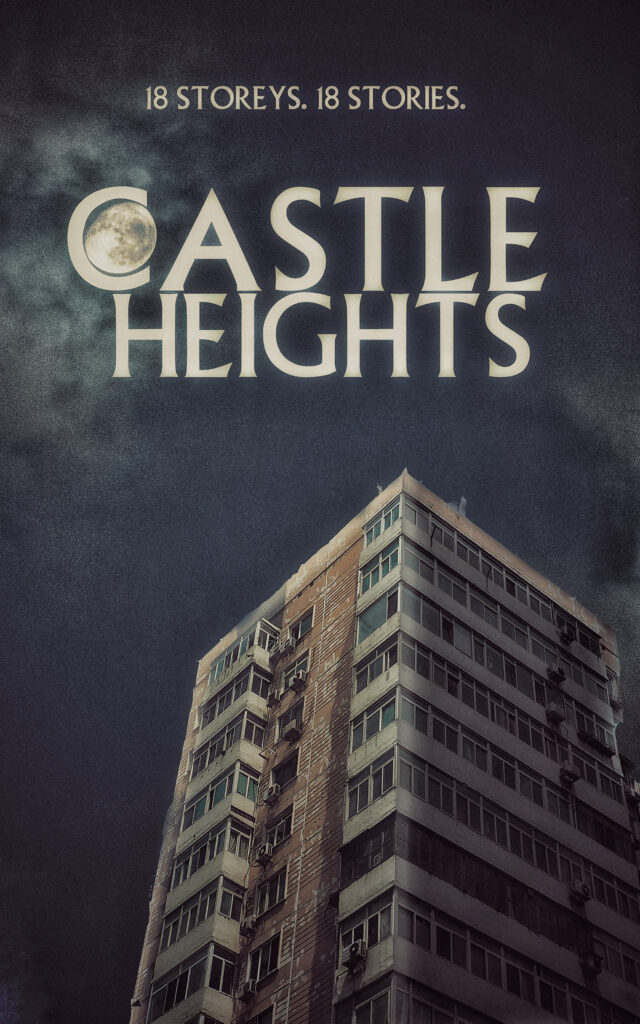 I recently had the opportunity to check out the British Horror Anthology, Castle Heights: 18 Storeys, 18 Stories. Short story collections are one of my preferred reads so I was already intrigued before even opening my digital copy and through the close of the last tale it did not disappoint.

The cover has a dark and sinister picture of a large apartment building under a dark sky. I immediately thought of the images of the Grenfell Tower that were in the news after the disastrous fire there in 2017, which set an oppressive and ominous feel from the start. Cover description states “Castle Heights is an ordinary looking London tower block… from the outside. But within the drab walls, things aren’t quite so innocent… or safe. Experience the disturbing events which take place on one fateful night as eighteen writers bring you eighteen stories – one set on each floor. From monsters to killers, the supernatural to the bizarre, these interlinked tales will have you desperate for escape as you make your way up Castle Heights from the ground floor.” Some of the contributing authors include PJ Blakey-Smith, Monster Smith, and Tony Sands and they, along with their fellow scribes, deftly use their skills to create a nightmare world inside of a run-down apartment complex.

Each of the 18 included stories have several common threads: a seemingly ordinary evening, a televised boxing match, a sudden power outage, a “fireworks display”, and finally the arrival of folks in uniform. Some tales also make use of the complex’s creepy caretaker, Trevor, who seems to appear and disappear at will, never providing much help to the hapless residents of the tower’s flats. Each author then goes beyond the given framework and makes each terrifying tale their own, incorporating examples of ghoulish ghost stories, bloody body horror, devilish demons, and more. I absolutely felt the influence of classic horror authors, such as Stephen King and Clive Barker between these pages, and it is clear that the contributing writers are not only practitioners of the horror craft but observant fans as well.

This is a good-sized anthology, clocking in at about 400 pages, and the stories range in length from short to small novella. Right out of the gate, author David Chaudoir starts us off with what appears to be a mundane cop drama in “A Hole in One” but it quickly turns it into a grisly revenge tale with elements of ancient and mystical rites. “The Boy on the 5th Floor” by Alice Henley gives us a home invasion story from a decidedly youthful perspective. While these tales as well as many of the others are frighteningly fun horror romps, two tales did stand out as they each effectively utilized one of my favorite elements of horror, which is its use as a stark reflection on the human condition.

In “A Guilty Feeding on the Fourth Floor” by Teige Reid, a hired assassin insists that she feels no remorse over her chosen profession, going so far as to state that she “breaks the guilt all down into small, easy to swallow and manageable bites”. That denial comes back to haunt her as the gruesome story unfolds. Another favorite, “Loathsome Reflections at 69” by Grant Kempster, gives us a story of the consuming nature of grief. We’re introduced to Bob who has turned to an unusual companion after the unexpected loss of his wife, but unfortunately for this melancholy protagonist, his “new friend” has dastardly ulterior motives.

I loved the overall theme of this collection, and the idea of setting the terrifying tales within a run-down tower block, with its flickering lights, broken lifts, and creepy caretaker was scary and effective. I could easily picture this as a haunted house attraction, with each floor offering different horrors as you make your way up and hopefully back down again. As much as I liked the collection, there were a just a couple of stories that I struggled with, mostly due to writing style, but overall, this was a solid anthology with mostly enjoyable reads. My only other criticism would be the lack of editing creating some challenging passages regarding text and spacing but again, a minor criticism and it did not affect the level of enjoyment in reading this book.

Castle Heights: 18 Storeys, 18 Stories was published on June 21st, 2021 by Red Cape Publishing and is available on Amazon in both digital and paperback form.

Red Cape Publishing are pleased to announce the release of Appletown by Antoinette Corvo on October 8th.