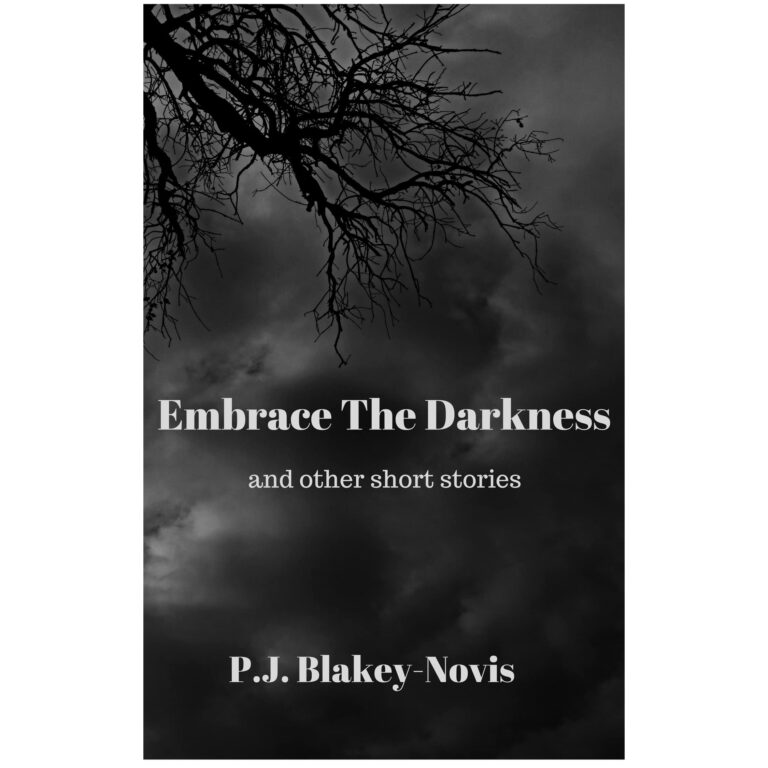 I just finished reading Embrace the Darkness and Other Short Stories by P.J. Blakey Novis for the second time and found that I appreciated it even more the second time around. Codependency, wearable tech, and witchcraft are several of the themes covered in the six scary stories in this collection and each one was a horrific insight into each. This was Blakey-Novis’ first solo anthology outing and he deftly navigates these terrifying tales.

The cover is an ominous image of a skeletal tree against an overcast background which reminded me of the opening theme of one of my favorite old television shows, Tales from the Darkside. I could almost hear the theme song as I dove into this anthology. Cover description states “Step into the mind of the unstable, where nightmares become reality and reality is not always what it seems. Embrace The Darkness is a collection of six terrifying tales, exploring the darker side of human nature and the blurred line between dreams and actuality.”

This is a short and scary anthology, coming in at only 70 pages, and while it is a quick read, the stories and some of the imagery that each conveys will stick with you. The stories are “Abandonment”, “Betrayal”, “Dream Catcher”, “Embrace the Darkness”, “Opened Up”, and “The Devil’s Pocketwatch”. While I enjoyed this entire collection, there were two standouts to me, “Betrayal” and “Dream Catcher”.

In “Betrayal”, a pair of sisters living in what I imagined to be the height of the witch hunt era, which spanned from 1450-1750; three hundred years of hysteria with often deadly results. The siblings at the heart of the story share a unique gift that ultimately leads to their downfall. It is a very succinct tale that well captures the feel of those troubled times and the betrayal at the heart of this ultimately tragic story.

In “Dream Catcher”, Blakey-Novis covers the topic of tech wearables with a very dark twist. Our protagonist, Paul, gets the opportunity to get his hands on a brand-new device called D2V or Dreams to Visual, that mostly behaves like a regular smart watch or fitness tracker but has the added perk of being able to record and playback your dreams. Sounds kinda cool until Paul’s dreams reveal some very sinister nighttime activities.

This view into the dark side of humanity was definitely a fun read! Fellow horror fiends will recognize that our idea of fun is often different than what might be considered the usual. No light beach reads on my TBR! My only criticism of Embrace the Darkness would be that the short stories were almost too short and sometimes felt a bit abruptly tied up. For example, in “Betrayal” Blakey-Novis conveys the where/when/and why very well with his good use of imagery, however I wanted to hear more about the main character when all was said and done. That said, each tale gives a good amount of detail as well as decent explorations of each individual theme with some nice little twists to keep the reader interested.

Embrace the Darkness and Other Short Stories was published on July 3rd, 2017 by Red Cape Publishing and is available on Amazon in both digital, audio, & paperback form.

Hear Us Scream: The Voices of Horror, Available Now

A cry wolf novel, book one: THROW ME TO THE WOLVES coming out May 2022 from Black Spot Books