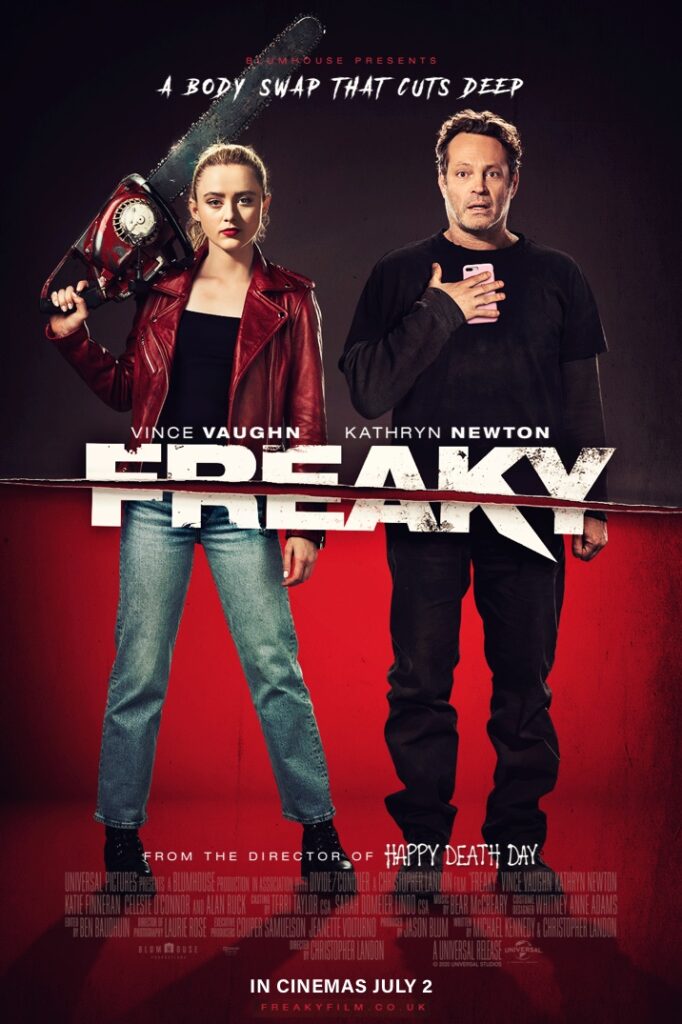 Freaky has a fairly familiar set up: lovable nerd Millie (Kathryn Newton) is a shy, frumpy teen. Recovering from her dad’s death, she’s staying out of everyone’s way, getting bullied by nasty classmates and mean teachers. She fancies local heartthrob Booker but as he ignores her, she tries to remain invisible tucked away out of sight with her two besties, lovable gay best friend Josh (Misha Osherovich) and sassy Nyla (Celeste O’Connor). So far, so horror cliched, but things are getting better.

Then one late night working as a put-upon sports mascot, she’s attacked at her high school by the local urban myth, the Blissfield Butcher (Vince Vaughan). Waking up the next day, she realises she has swapped bodies with him and has to go to school as a 6’5’’ middle aged serial killer, while he has turned into a petite blonde teen. Blissfield’s Mean Girls and crass teachers are going to have to watch their backs.

Vaughan as Millie is at his sly, smart best, as funny and outrageous as he was in the 1996 indie Swingers that got him noticed. After coasting along in quite a few entertaining but lazy romcoms, in his early 50s he now needs to mine that smart streak that got him noticed, and this is the perfect vehicle.

Newton as Millie (and then Butcher) is equally likeable then scary and does a great job in either body with a smart oneliner or creepy stare – she knows what to say to terrify/turn on the adolescence males.

As the trio continue trying to return Millie to her original body, she continues flirting with Booker, despite being disguised as the Butcher, and eventually the two kiss. With Americans worried about fictional characters being gay, let alone actual real life people, so to see a same-sex kiss in mainstream horror is a step forward. Even if it was between a jock and Millie as a mass murderer with hands “bigger than Booker’s head”.

Freaky manages to be entertaining with a Final-Destination-esque aplomb and pulls off funny, and disturbing at the same time. It nods to the horror classics (watch for the Halloween 1978 style pinned to the wall death) as well as invents a few new takes on murders – wait for the innovative death-by-toilet-seat).

As well as a sassy take on ‘80s style splattergore slasher, it mines the casual cruelties of high school that a few 50somethings are still wincing about. It also has some understatedly good writing, as in the oddly touching scene with Millie’s mother talks to her daughter in the clothing shop (as the Butcher) thinking she’s talking to a male customer. Fresh, funny and unpredictable, Freaky is an intelligent horror, and we need more mainstream slashers like this.

Get your (comedy) Freak on.

Slasher 4.0 will be a major shift forward for those celebrating all things horror