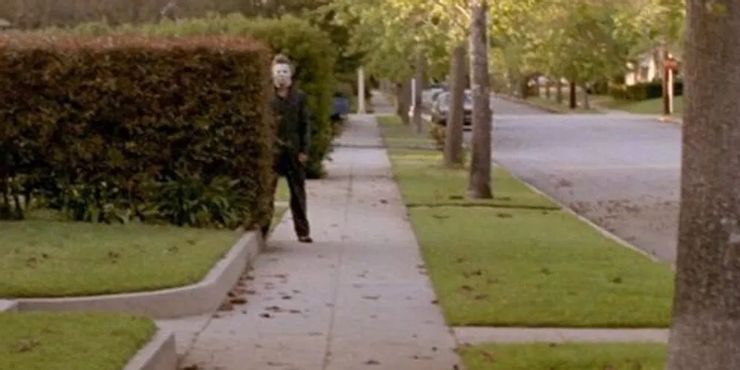 What could be a more atmospheric time of the year for a horror shoot than Halloween? Autumn brings longer nights and rapidly-darkening skies, with trees turning ominous shades of red and gold, plenty of opportunities for scary things in woods to crawl out, unwisely-chosen short cuts through darkened streets…surely October was designed for horror films?

But shooting times don’t usually connect with the season, so behind the scenes a good deal of work may have to take place to ensure the outside locations look suitably autumnal.

The most famous film in the genre, John Carpenter’s 1978 classic Halloween, is set as everyone knows in the fictitious town of Haddonfield in Illinois, on Halloween itself. However, it was in reality shot in May 1978 in Los Angeles.

This meant that the trees – seen clearly throughout the film as being a fresh, springlike green – were not losing their leaves. This forced the crew to use artificial leaves for the pavement, and scooped the fake leaves up after a take, so they could be reused at the next location.

London-based actor Roman Wood, who appeared in microhorror Halloween Girls, knows the downside of creating that Halloween glamour, even down to the added leaves. The short was shot half in Los Angeles outside the famous house where Halloween’s heroine Laurie Strode sits, and half in London at midnight.

His character is on his Iphone to his LA friend, who is about to discover – to her cost – that Michael Myers is more than just a festive horror story. Roman’s scenes were shot supposedly on Halloween, but was in reality in January in London. This saw him, like Laurie, surrounded by leaves, in this case collected by the producer the previous autumn, to add the correct seasonal touch.

The actor admits that pretending it was a balmy October night in nothing more than a Tshirt and leather jacket in the depths of winter was less than easy – especially when a hailstorm struck.

Roman says: “My character doesn’t know anything is wrong with his friend in LA while she’s sightseeing in this famous horror location, so he’s just enjoying a mild Halloween walk in the park while they’re chatting.

“In reality, we were shooting in early January so we were all freezing and when a hailstorm suddenly hit, and knocked over the camera, we were worried it would stop filming. But after we’d wiped hail off the film gear, the show went on as it always does!”

Carpenter was involved four decades later in 2018’s Halloween, this time shot even earlier in the year in January and February in Charleston, South Carolina. This again saw all the fake “fall” leaves (and pumpkins) having to be created from scratch.

“Carpenter’s latest instalment (Halloween Kills, still in cinemas) boasts a cameo from Charles Cypher who appeared in the original as Brackett. He returns with his reprised line – delivered in the ’78 version to Laurie but given this year to Myers himself – “It’s Halloween. Everyone’s entitled to one good scare.”

So as you kick your way through a pile of leaves to the local supermarket to get your pumpkin for this festive weekend, at least you won’t have to create any movie magic to get that authentic look.

The Howl Scream Park Scaring Up Crowds this Halloween