Creepiest children’s movie of all time – and chances are, you’ve probably never even heard of it. 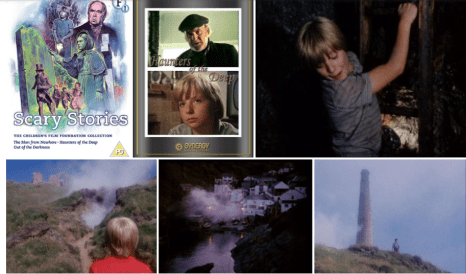 THIS could be the creepiest children’s movie of all time – and chances are, you’ve probably never even heard of it.

With Halloween just around the corner, you might be tempted to settle down as a family to watch some spine-tingling celluloid.

But unless you want to give a youngster nightmares, you might want to give Haunters of the Deep, a sinister British flick from 1984, a miss.

So says Dr Noel Brown, a Senior Lecturer in Film at Liverpool Hope University and author of the recent book British Children’s Cinema: From the Thief of Bagdad to Wallace and Gromit.

He’s been sifting through his favourite fright films designed for youngsters.

And Dr Brown says Haunters of the Deep – about a tragic horde of ghost children who torment a group of kids on holiday in Cornwall – is an unsung classic. Seek it out, if you dare…

He explains: “Haunters of the Deep is a really interesting film from a British organisation called the Children’s Film Foundation. It was funded by the Government through a tax on cinema admissions. So, anyone who bought a cinema ticket between the early ‘50s and the mid-80s helped to fund the production of low-budget, small scale films intended for children who attended Saturday morning pictures.

“These films weren’t really intended to make money, though some were later shown on TV, and they’ve sort of been forgotten about by an entire generation of people.

“Some of them – particularly Haunters of the Deep and Daemon, a nightmarish tale about a young boy being possessed by a demon, are really, really good.”

Haunters of the Deep was shot in various locations in Cornwall, particularly Boscaswell and Trewellard.

You can watch Haunters of the Deep, Cert PG and directed by Andrew Bogle, by visiting the British Film Institute’s ‘Player’ video rental service. You can also watch the intro to the film via the Children’s Film and Television Foundation’s YouTube channel.

And Dr Brown – who recently wrote about the Hollywood habit for happy endings in children’s films, and how anxiety-ridden British cinema from the 70s tried to buck that trend – says Haunters of the Deep is full of atmospheric dread.

He adds: “It’s a really creepy story about a group of kids who go on holiday to Cornwall.

“There’s a tin mine – the ‘Devil’s Mine’ – underneath the surface of the ground. At some point in the past, child workers were sent down into the mine to work but the seawater broke through the cavern walls and killed lots of them.

“In the film, some of those children come back as ghosts. And the results are really chilling. You get these eerie shots of dead children standing on hills looking completely white, shrouded by mist. It’s really atmospheric. Of course, the kids on holiday don’t know what’s going on and are terrified out of their wits.

“In the end, the ghost kids are not unfriendly, and there’s a resolution of sorts. And the film also makes an important social comment on the practice of child labour. Of course, you don’t have to look at it at that level – it still works just as a short, scary movie without the social commentary.”

Here Dr Brown, who edits upcoming book The Oxford Handbook of Children’s Film, which is due for release in May next year, talks us through his other choices for scariest – and most important – children’s horror flicks of all time.

Dr Brown says: “This is an adaptation of a Roald Dahl novel, recently remade by Hollywood but which is nowhere near as good as the original, British version. Before The Witches, Nic Roeg was already a notable director of adult horror films. He directed Don’t Look Now, one of the creepiest films ever made. And this raises a really interesting point about the way lots of people think about children’s films as being ‘separate’ from films for grown-ups. I don’t think Nic Roeg felt that – The Witches was an extension of the kinds of films he’d been making for adult audiences. So he doesn’t hold back in the cinematography and he uses some of the conventions of horror films – including tight framings and lingering shots on the witches’ horrible transformations, as well as jump scares – or in the dark themes being explored. He doesn’t try to juvenilise the source material either. The parents die early in the film, the boy has to be looked after by his sick grandmother, and the witches themselves are grotesque. They’re not comedic. And it’s this seriousness and conviction which makes The Witches so frightening.”

“This is a really important film within the context of contemporary Hollywood cinema because it basically brought in the PG-13 rating in America. Up until this point, there was the ‘G’ rating for children, a ‘PG’, which meant younger children might need to be accompanied by an adult, but they didn’t need to be, and then there was the ‘R’ rating, which meant children under the age of 16 shouldn’t watch.

A lot of the family films being made by Disney at this time were very juvenile, only for children. But then George Lucas and Steven Spielberg came along and started producing films like Star Wars, Close Encounters Of The Third Kind, and Back to the Future, which re-invented the traditional idea of the family audience, but which also pushed boundaries in trying to appeal to a slightly older audience. Spielberg did this with Indiana Jones and the Temple of Doom, which got a PG rating but was really scary in places – you had a death cult pulling out people’s hearts! Shortly afterwards, Spielberg produced Gremlins, another film rated PG. People started saying, ‘We can’t have this rated PG – it’s scaring the kids!’ You have the Gremlins being destroyed in really grotesque ways, including being exploded in a microwave. And this is when authorities decided they needed to introduce a PG-13 rating, which was the precursor to the 12A rating here in the UK. And don’t forget that director Joe Dante also knew his way around a horror film before making Gremlins, having also made cult werewolf movie The Howling. With Gremlins, Dante wanted to have his cake and eat it – he wanted to appeal to children but also to teenagers and adults. PG-13 provided a bridge between the children and adult markets – and it changed Hollywood forever. Most of Hollywood’s biggest hits now, from Lord of the Rings to the Marvel movies, are PG-13.”

The Nightmare Before Christmas (1993, directed by Henry Selick)

Dr Brown recently published the book Contemporary Hollywood Animation, and there’s a chapter on animated children’s horror films – of which The Nightmare Before Christmas is a classic of the genre.

He says: “It’s such an influential film in contemporary animation. This was a Disney film, but the studio was worried about alienating its traditional audience and so put it out through its more adult distribution arm, Touchstone. Tim Burton wrote the script and devised the concept art and, up until this point, most of his films had a dark, Gothic sensibility, full of grotesque humour. And one of the things that’s so important about The Nightmare Before Christmas is that it redefined the kind of thing that mainstream Hollywood animated film could do. It could be dark, it could have non-conformist characters, it could have moments of disgusting humour. Burton and director Henry Selick created this subgenre of animated features that would appeal to children but which had comic horror tropes within it – including nightmarish settings and bits of body horror – all of which also turn up in Burton’s Frankenweenie and Corpse Bride. A genre of creepy, dark animated horror films for children was born.”

“I think this is one of the best Hollywood animated films. It’s got lots of iconography that we associate with adult horror films but it uses humour to diffuse a lot of the tension. It’s about a boy, Norman, who can see dead people. It’s obviously playing on The Sixth Sense. Norman has very friendly conversations with ghosts in the movie but everyone else thinks he’s odd. He’s really good hearted and kind and he turns this idea of being weird into being a badge of honour that he wears with pride. He likes being weird. And he’s another unconventional child protagonist of the kind that have been celebrated in recent years. They never were in the classical Disney films. Like The Nightmare Before Christmas, this idea of non-conformism as being something to be celebrated really comes to the fore in films like Paranorman. There are jump scares and references to lots of adult oriented horror films. The zombies look just like the undead from George Romero’s films. When Norman sees horrible things coming at him, we see it through his eyes – and that’s a technique that’s used in adult-oriented horror films. But there’s also something important the film does to alleviate those moments of horror – they’re made comedic. There’s this famous scene where Norman – who is trying to lift a curse that has been placed on the town – tries to pry a book from the hands of a dead man. Rigor mortis has already set in with the corpse, and Norman ends up pulling the body on top of him accidentally… just as the dead man’s tongue flops out and onto Norman’s face. It’s a moment that could be played for pure horror but it’s also played for laughs. There’s also a social comment going on in the film, too. The main villain is the spirit of a teenage girl who’s been burned at the stake for being a suspected witch. Basically, she’s been the victim of child abuse. Norman has to talk her down and appeal to her humanity. Again, it’s about children who don’t conform to social expectations being victims – it’s a parable of accepting difference.”

And ones for the adults….

“When it comes to adult horrors, the scariest for me are Stanley Kubrick’s The Shining and John Carpenter’s The Thing. What I really enjoy about horror films is the atmosphere of dread. And both The Shining and The Thing just have a mounting sense that something awful is happening and it can’t be stopped. There’s an incredible sense of doom. The stop-motion special effects in The Thing are also just amazing.”

** To learn more about studying Film in the School of Creative and Performing Arts at Liverpool Hope University.**