An Interview with Jemma Dallender 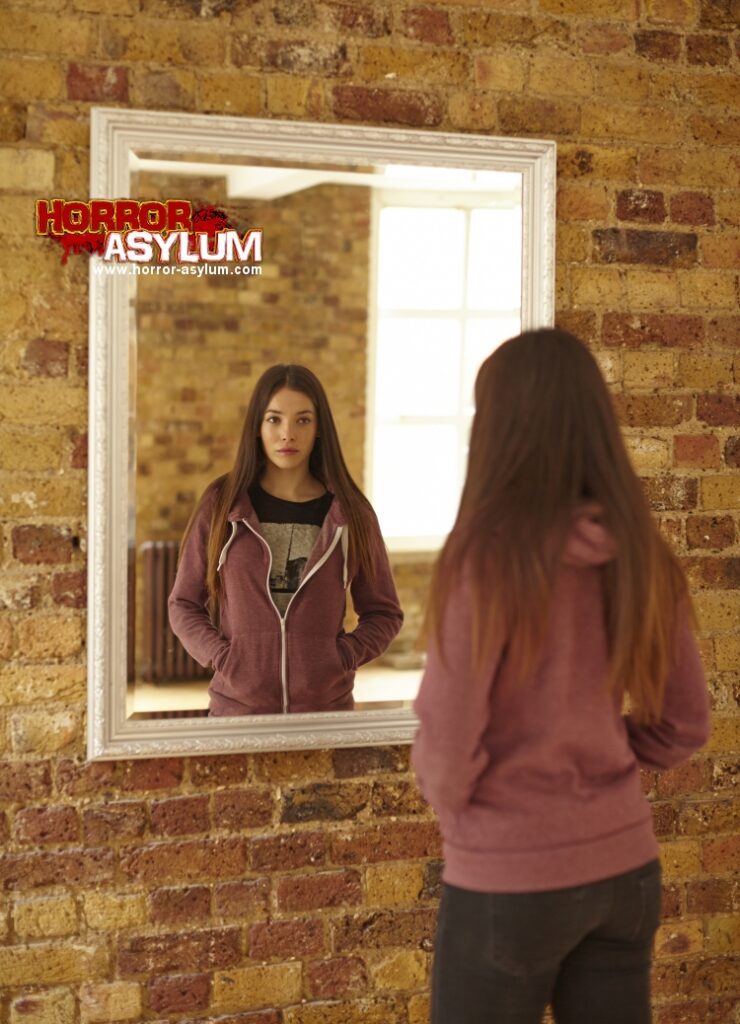 The gorgeous and talented Jemma Dallender, star of new UK found footage chiller ‘The Mirror’ and last years revenge thriller follow-up ‘I Spit on Your Grave 2’, has been talking with us about her experiences, her cast mates and what she thinks about becoming Britain’s next best scream queen.

How did you first get involved with the project?
I auditioned for my part in ‘The Mirror’ by telling a made ghost story about a spirit that came to visit me and my grandmother.

Unlike many found footage projects to date the relationships between the characters in ‘The Mirror’ seem very natural. How much work was involved in bringing this level of realism to the movie?
We spent a week prepping for the film and going over in detail the background for each of our characters. I think that largely it was the great casting (Gillian Hawser) which made it so realistic, we all got along so well and are still in touch.

What makes a found footage project different for you as an actress in regards to your preparation and the shooting process?
In lots of ways it was rather liberating because we all got the opportunity to help create our characters and their journeys. This also made us quite protective of our characters as we really felt they were an extension of us. I enjoyed being able to experiment and say whatever my character wanted to say without being held back by any text. However, it made me appreciate good writing because it’s very hard to improvise and get all the beats in the scene across. Writers spend a long time re-writing and refining lines so that the story is told in the best possible way.

Did you watch any other found footage movies to help prepare for your role?
I wanted the experience to be as organic as possible so I didn’t watch anything new but I had seen ‘The Blair Witch Project’ a few years back. I think the key to a ‘found footage’ role is to have a good strong character so I spent a long time concentrating on my characters backstory and relationships, in fact we all spent a long time discussing it together.

Near the beginning of the ‘The Mirror’ each character discusses his or her beliefs and encounters with ghosts and the paranormal. Have you yourself ever had such an experience?
I’m happy to say I have not had any ghostly experiences as of yet!

Did you ever get spooked on set or feel a little uneasy around the mirror itself?
‘The Mirror’ we used on set wasn’t the original mirror and because I knew this I think it made me feel more at ease. I think if we had managed to get the original one, then I probably would be have been petrified!

With both ‘The Mirror’ and revenge thriller sequel ‘I Spit on Your Grave 2’ now under your belt do you think you’ll land further horror roles?
Funny you should say that, there is something new in the pipeline but I can’t give anything away just yet. Watch this space!

Do you enjoy watching horror yourself and if so do you have a favourite film?
I’ve always said that I enjoy watching a huge variety of films. I have watched a large amount of horror films and one of my favourites is ‘The Tale of Two Sisters’ directed by Kim Jee-Woon.

We hear that you are soon to be working alongside writer/director Joël Colburn on his new action thriller ‘A Sexual Thriller’? Could you tell us a little more about the project?
It’s the story of a brave, sexy young operative for a secret, Black Bag operation run by the CIA tires of killing for her superiors and goes into business for herself, exacting revenge on the parties responsible for the death of her fiancé. I’m playing the part of ‘Michelle’, a fellow CIA agent assigned to help Alexandra catch her fiancés killers.

Edward Boase’s ‘The Mirror’ arrives on DVD here in the UK on 8 September.