An Interview with Steven DeGennar 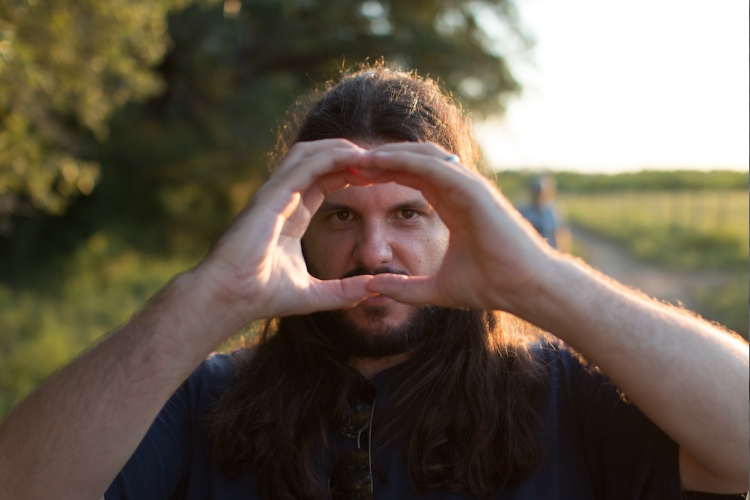 The audience starts with a 2D cold start of the opening line of the proposed movie script for the found footage movie. Naturally the hip young filmmaker Derek, staring earnestly at their misspelled script, needs a new angle to make his film stand out from the found footage crowd (Troll, Blair Witch, Big Foot, Behind the Mask: The Rise of Leslie Vernon). So Derek’s USP is that he’s shooting it in 3D. There’s a lot of arguing about whether real life holidaymakers, unlike the actors Derek will be filming to portray them, would bother buying a lot of expensive 3D equipment, but after a lot of excitedly filming each other in 3D in the kitchen while wearing their new film Tshirts, they all get ready to start shooting.

The crew pile all the film equipment into the van and drive off to the location, a deserted cabin where Amy and Derek’s characters are holidaying (or vacation-ing, as the director’s script misspells it).

The crew ask two elderly locals if they wouldn’t mind standing in as actors giving directions to the cabin, pretending to sound nervous when they realise when the group is headed. Although at first happy to play along in the roles, when the old timers hear where the group is going they refuse to go on camera and leave hastily, to the crew’s unease.

When the gang finally arrive at the cabin in the middle of the night, things hardly improve: it’s dusty, abandoned for many years, with a weird black stain on the floor. After a lot of cleaning, the crew settle down a daytime routine of filming hand held footage and arguing about the filming methods in the surrounding woods, then crashing on the floors all night to sleep, despite the strange noises outside. The shoot seems to be going fine.

But then they return to the cabin one night and find instead of the usual organisation, a Blair Witch style chaos. When filming in the kitchen, suddenly (as in Paranormal Activity), chaos suddenly erupts: cupboards swing open, utensils fly around and the crew has to dodge crockery. Other disturbing events start happening: Amy wakes up with scars scratched down her arm as though she’d been attacked by an animal in her sleep. The mystified crew check their latest footage and in one of the creepier scenes see footage of themselves sleeping. So when the scratches appear on Amy’s arm, who is doing the filming?

Director Steven DeGennaro has a dry sense of humour which will work well with a British audience. His sound operator makes fun of the crew’s misspelled Tshirts with the Brit spelling of “Spectre” rather than the Americanised “Specter”, and demands sardonically to know if the spelling will stay Anglised to the extent that: “Are we going to see it in the “theatre”?” and DeGennaro elaborates that there had been some more ad libs about tea and crumpets, etc in the British theme of things.

The director says it was nice for his film’s end to get one of the festival’s biggest screams of fright as well as laughs, as it is designed to be “funny/scary at beginning, then scary/funny at end.”

The film is produced by Kim Henkel, co-creator of the classic The Texas Chainsaw Massacre, whose influence is subtle but recognisable.

DeGennaro explains: “It was so great to work with Kim Henkel, who was sweet and knowledgeable. He read draft after draft and he would say if one did or didn’t made sense, and we always would see afterwards he was right. The Chainsaw Massacre influence is clear when the viewer sees the ribs in the floor, although its overall tone is closer to Scream or Blair Witch.”

Describing the shooting struggles of filming so quickly on location for his first feature, the director says: “We only had three days’ rehearsal. We lost our first gaffer and our AD said no, shooting 14 pages [of script] in one day, that’s impossible. I could shoot an entire movie out of the material cut from the original.”

“We weren’t worried about continuity, as the actors could reinvent the scene. We wanted something ghostly for the movie’s Spectre, something in your head, but we had to scale it back due to what’s in budget.”

He mentions that the real life mirroring of events started when the cast first visited the abandoned cabin late at night before the shoot and were as nervous as their fictitious counterparts: “I wish we’d filmed that as well,” he adds sadly.

His main aim was to “make you care about the characters and how they react to what’s happening.” He mentions it is important to love all the characters, and Amy is a favourite, as you “feel for her”.

“Derek and Amy’s portrayal of their characters would make or break the film. We cast for the characters in five different cities, to convince distributors and investors.”

The director reveals there is an alternative, less horror ending, where the actors are in fact messing with the director, making him believe something is creating a found footage movie.

There was also an alternative ending written where the actors see a fire destroying their cabin, and later the viewer would see the Spectre featured in the newspaper footage of the burnt out cabin.

When pressed for how the film could have ended differently, the director will only say if the runner Lily hadn’t gone to the party, met the rest of the crew and been invited to work in the film. Yes, there is there a reason for what happens in the last few seconds of the film but he can’t reveal that. He grins and simply adds in explanation: “The Spectre likes messing with people.”