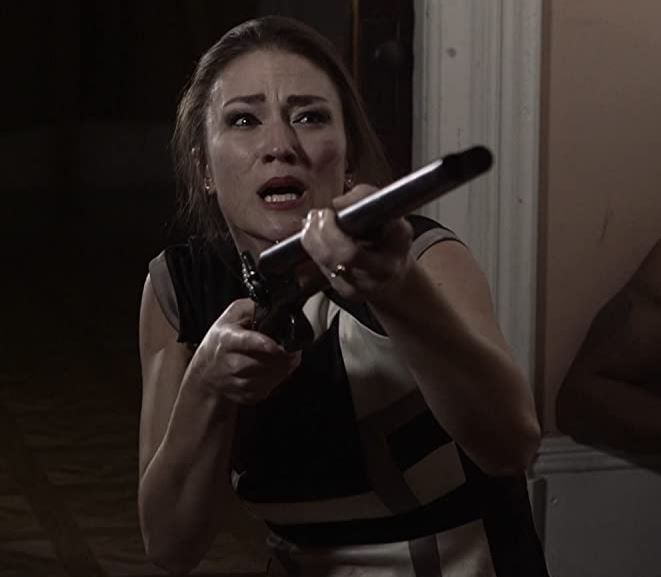 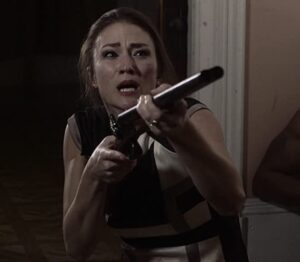 What attracted you to REBIRTH?

I had worked with Roger Conners on one other project and instantly knew he was not only an incredible human, but also a very talented artist – whether it’s directing, make-up, acting, or any other creative endeavor he decides to take on. When Roger asked me if I was interested in his project (Rebirth), I instantly said yes.

Tell us a little about your character?

Helen Cooper is written decidedly different from the original in a few ways but in a sense keeps that 1960’s housewife impression in the way she handles herself and her family. Even in her disagreements with her husband, she tries to keep things under control and respectable, in spite of her husband’s horrific judgments, words, and eventually actions. She is stronger than even she believes and shows that grit when things spiral out of control.

How was it working with the director, ROGER CONNERS?

I wish more indie film directors cared and respected their talent as Roger does. Because he cared about everyone’s time and work, he came to set each day having done extensive research and preparation for what he wanted to accomplish that day. It’s difficult to manage a set like this with a low budget, you have to take on more work than those who may have multiple assistants to help pull the vision for the movie through. He worked tirelessly and still does because he values others’ work.

How does this character differ from other characters that you’ve played?

What was your most difficult scene? Why?

This may come as a surprise, but the most difficult scene for me was the very first one I filmed between me and Alvin (Herold Cooper). Not a particularly difficult piece of acting, but I struggled for a moment. I come from a theatre background, and this was only my second film. With theatre, you have many rehearsals before you put out the final product. It was our very first day on set, and that first argument between me and Harry was not jiving as well as I felt it could. After taking some direction from Roger, the scene settled in and it flowed from there.

What was your favorite day on set? Why?

We filmed all of the cellar scenes on my first day on set. I loved it. I love when I am on set and constantly working, and then being exhausted at the end of the day. We went semi-chronologically, from my opening scene all the way to my death to when you see me “turn”. One of my favorite moments from that day was when the SFX makeup artist handed me a bag of real pig guts and Roger told me I’d be dropping those on my feet for the shot and shuffling around in them. It was disgusting and hilarious at the same time!

What movie or event from your childhood turned you on to the film industry?

To be honest, until I stumbled across my first indie film opportunity, I had no idea that Ohio had a film or commercial scene for actors at all. I always wanted to perform, however. After I was cast as the narrator in Joseph and the Amazing Technicolor Dreamcoat in 8th grade, I was hooked. I have a music degree from the University of Akron (classically trained vocalist) and have a theatre resume miles long, but it wasn’t until Rebirth that I knew I really could transition from theatre to film quite easily.

Name your top 3 horror films of all time?

Event Horizon – I know this is Sci-fi horror, but there’s something about being stuck out in space on an evil ship scared the crap out of me when I first watched it.
The Exorcist – I also love all things supernatural, and this is an absolute classic.
Arachnophobia – Again, not traditional horror, but I HATE spiders in my space.

Anyone and everyone and anything and everything inspires me. Someone could have said something to me years ago and it will still fuel my passion for acting or motivate me to work harder on something artistically. I have seen inspiring things that are as small as a cool-looking moth caterpillar up to a cenote in Mexico. Cities at night I find especially inspiring. The experience of being a mother has fueled my creativity in ways I’d never thought possible also – costume making, painting, etc. If you’re looking at or listening to the world around you, chances are there’s creative inspiration to be seen/heard/experienced.

What’s next for Rachel Anderson?

There are a few projects that I have on my radar at the moment, a couple of films and one theatre script, all that I’m very excited about. With the pandemic mostly under control, the auditions for commercial work have been rolling in as well, which is very welcomed! I love acting. I don’t expect I’ll be anyone famous, but I’m going to continue to act/perform wherever I can, all while balancing my family life and my “adult” job.