“Vibrant, hyper-stylised and unadulterated in the extreme,this is pure action cinema at its best.”

Described by legendary actor Nicolas Cage as ‘the wildest movie I’ve ever made’ PRISONERS OF THE GHOSTLAND is a high-octane, post-apocalyptic tale of redemption and uprising that marks celebrated Japanese director Sion Sono’s first English-language film.

In the treacherous frontier city of Samurai Town, a ruthless bank robber (Nicolas Cage) is sprung from jail by wealthy warlord The Governor (Bill Moseley), whose adopted granddaughter Bernice (Sofia Boutella) has gone missing.  The Governor offers the prisoner    his freedom in exchange for retrieving the runaway.  Strapped into a leather suit that will self-destruct within five days, the bandit sets off on a journey to find the young woman— and his own path to redemption.

“There is a sweet spot between deadly serious and completely ridiculous that is enticing to us as storytellers” explain writers of the script, Aaron Hendry and Reza Sixo Safai, who were inspired by the world of high intensity and surprising absurdity found in the cherished action and horror films of their youth, films such as The Wild Bunch, Road Warrior, Evil Dead, Conan, The Barbarian, The Good, The Bad & The Ugly. 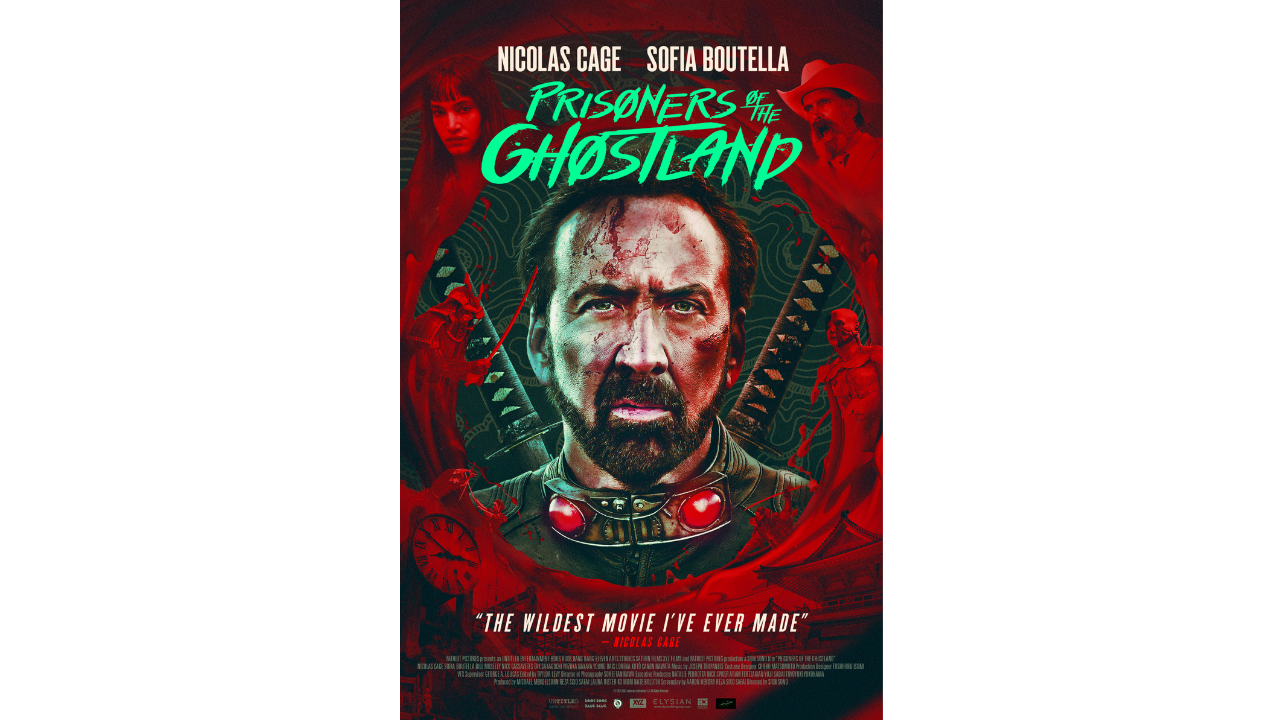 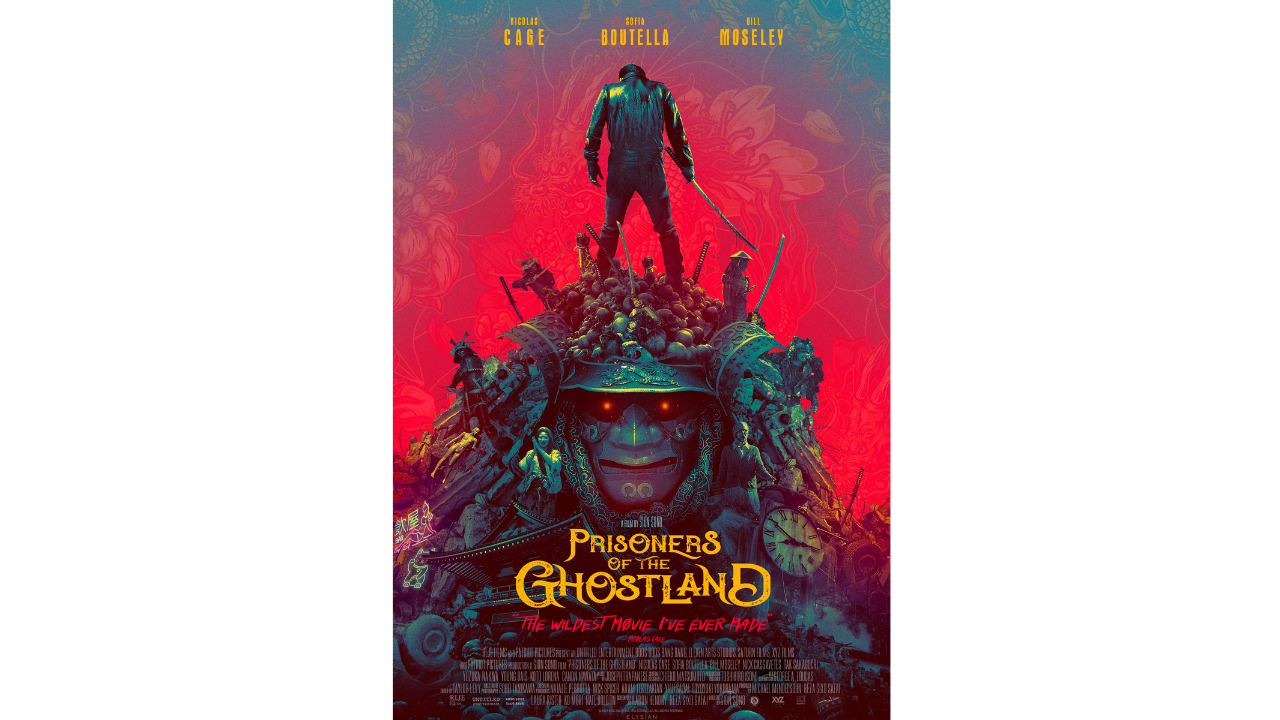 The rollercoaster adventure of PRISONERS OF THE GHOSTLAND alludes to serious themes including the ugly spectre of 80’s atomic power but never takes itself too seriously.  Embracing this marriage of the profound and the absurd, the eclectic and irreverent Japanese director Sion Sono proved the perfect collaborator.  Henry and Safai recall “When Sion came onto the film, the influence of his experience, artistry, and culture pumped psychedelic steroids into each of these early notions that gave birth to the initial script.”

Director Sion Sono, one of the most distinctive and universally celebrated Japanese auteurs, is known for films that range from social dramas to wild, uncompromising, uninhibited cinema.  Dubbed by The Hollywood Reporter as “the most subversive filmmaker working in Japanese cinema today”, his films are always pushing boundaries and constantly surprising.  He has directed over 50 feature films including Love Exposure (winner of the Caligari Film Award and the FIPRESCI Prize at the 2008 Berlin International Film Festival); Himizu (winner of the Marcello Mastroianni Award at the 68th Venice International Film Festival); and the action-drama Why Don’t You Play in Hell? (winner of the People’s Choice Award in the Midnight Madness section at the 2012 Toronto International Film Festival).  Explaining his approach to PRISONERS OF THE GHOSTLAND, his feature English-language film, Sono comments “Using the classic storytelling of actions films, I created the ‘East meets West’ world that doesn’t exist anywhere else.  What I wanted to create is distortions of the modern society and its irrationalities making real of the unreal world.” 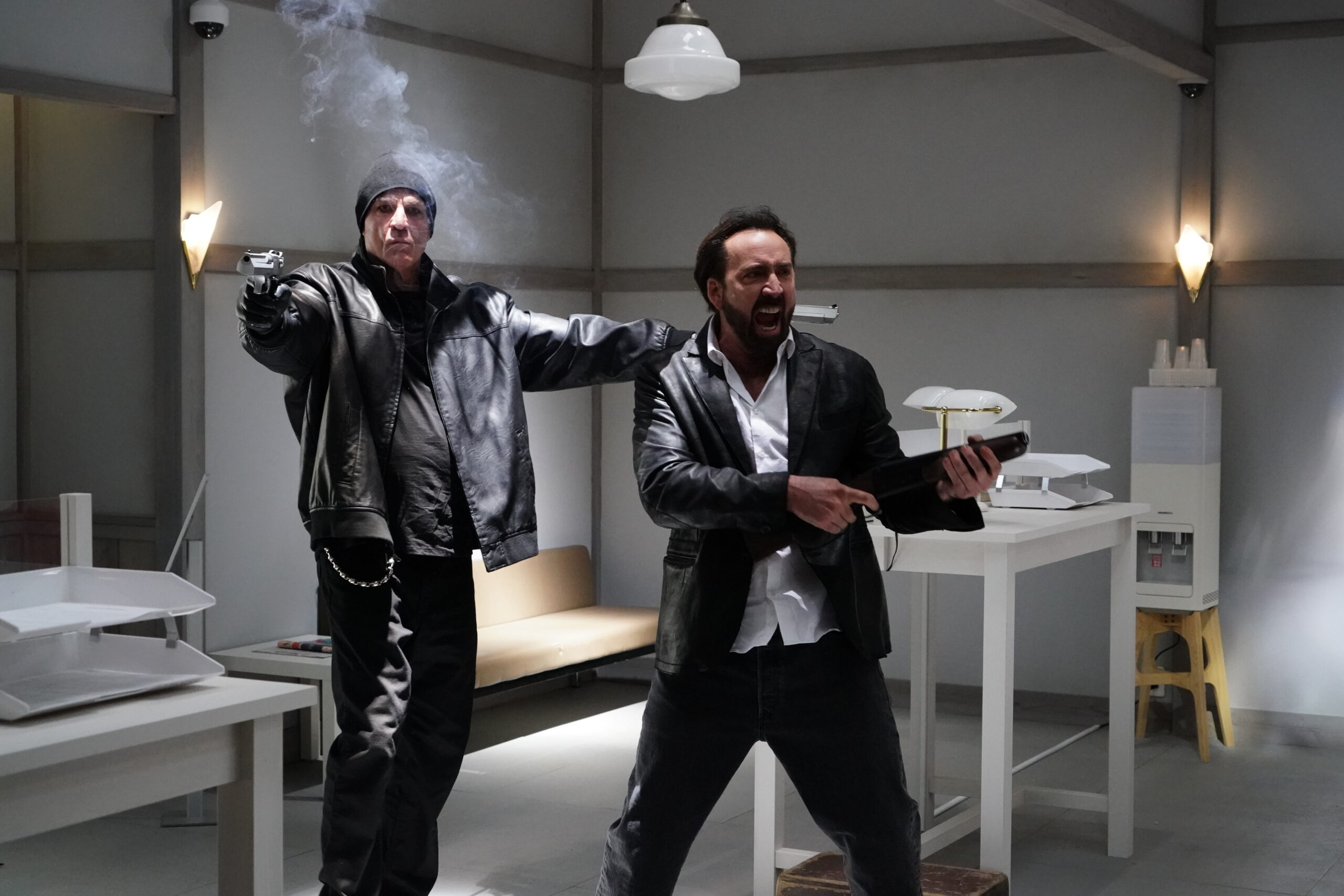 It was perhaps only a matter of time before Sono found his way to collaborate with kindred spirit and cult icon Nicolas Cage, an actor whose remarkable versatility has led to great success across all genres for over three decades.  Cage’s recent work includes the critically acclaimed story of a truffle-hunter Pig, his award-winning, groundbreaking performance in the horror/thriller Mandy, the critically acclaimed Color Out of Space, and the voice of Spider Noir in the Academy Award-winning Best Animated Feature Spider-Man: Into the Spiderverse.

Sofia Boutella is an acclaimed actor who recently starred in Amazon Prime’s Modern Love, in Fahrenheit 451 opposite Michael B Jordan and Michael Shannon and in Gaspar Noe’s Climax.  In addition, Sofia starred opposite Jodie Foster and Jeff Goldblum in Hotel Artemis and in Alex Kurtzman’s The Mummy, co-starring opposite Tom Cruise and Russell Crowe.  She also starred in the action-thriller Atomic Blonde opposite Charlize Theron and James McAvoy.  Previously, Sofia was seen in Justin Lin’s Star Trek Beyond and in Matthew Vaughn’s Kingsman: The Secret Service.  An internationally acclaimed dancer, Sofia starred in a series of iconic Nike ads choreographed by renowned creative director Jamie King showcasing her street dancing skills. In 2006, she went on to win the World Championship Hip Hop Battle with her group, The Vagabond Crew. From there, Sofia became a breakout star in the dance world and was invited to dance on tour with Madonna. She was also cast as the main character in the video of Michael Jackson’s ‘Hollywood Tonight’.

PRISONERS OF THE GHOSTLAND is the third theatrical release from Elysian Film Group, the newly established UK distribution company headed up by CEO Danny Perkins. Also on the slate for 2021 is Elysian’s first UK production currently in development GREATEST DAYS, a feel-good film based on the stage musical The Band which features 16 hit songs from UK boy-band, Take That. www.elysianfilmgroup.com