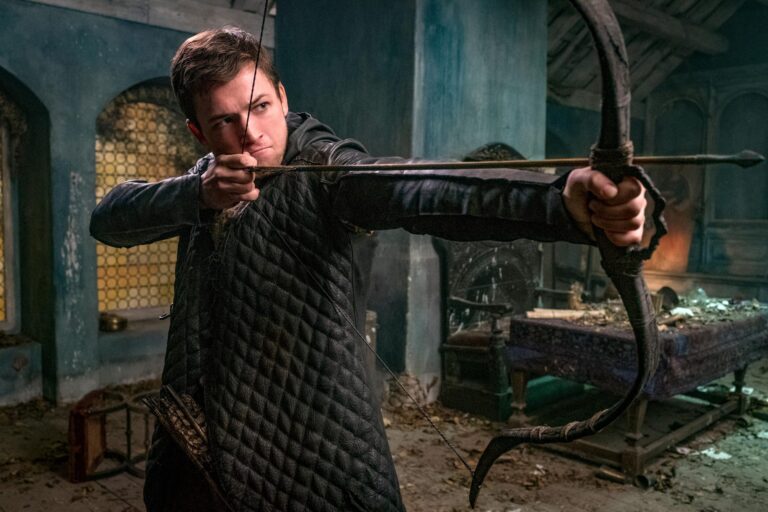 There hasn’t exactly been a shortage of ‘Robin Hood’ movies. In fact, there’s a Wikipedia page on the subject, which details every TV show and movie that’s ever been made on the topic. It runs to over one hundred entries, with a further three currently in production. You would expect that to mean that every conceivable take on the British fairy tale has already been done, and there’s no further need to make new ones. The Russell Crowe film from 2010 is probably the best recent example; imperfect as it was; and for a lot of movie enthusiasts, nothing is going to top the supremely funny ‘Robin Hood: Prince of Thieves’ from 1991, starring Kevin Costner and featuring a delightfully over-the-top performance from the late Alan Rickman. Despite all the competition, Otto Bathurst has decided to reinterpret the tale himself, with Taron Egerton in the lead role, and Ben Mendelsohn playing opposite as the wicked Sheriff of Nottingham.

He probably shouldn’t have bothered.

This film is confusing. Although ostensibly set in the 12th century; which is around correct for the ‘official’ version of the tale, it’s full of anachronisms. For a start, many of the characters appear to be wearing modern military style flack jackets of the kind that definitely wouldn’t have existed during this century, or for the eight centuries that came after. There’s a gold mine in the film that seems to use technology that would have been impossible for the time. Things have a way of blowing up in a manner that things just didn’t blow up in the dark ages. If this had been a re-interpretation of the tale set in the modern age, none of this would have mattered, but it isn’t.

Then there are the characters themselves. They, and the world they live in, seem remarkably clean. Everyone is well shaved and manicured. They wear what appears to be distinctly 21st century clothing, and drink 21st century drinks from 21st century glasses. We wouldn’t have been surprised to see Robin and his band of followers, instead of drinking mead and playing card games around the tables in the forest, logging onto RoseSlots.com and playing online slot games instead. There are, after all, historically themed online slots on there like ‘Age of Spartans’ which could be considered extensions of their world. Indeed, the slot games are probably more historically accurate than this movie, and significantly more rewarding as a form of entertainment.

There is what feels like an attempt to give the movie a more modern plot narrative as well. In the legends, the Sheriff of Nottingham (and King John) are simply greedy and cruel; they torture the villagers and steal their money for their own enrichment. In Bathurst’s movie, there’s a powerfully anti-Islamic sentiment coming from the Sheriff that ties in with Robin’s experiences in the Third Crusade, and drives the animosity more significantly than Robin’s historical ambition to simply take from the rich and give to the poor. Between this, and the fact that Egerton’s Robin is an all-out action hero swinging from buildings and firing arrows from a suspiciously-modern looking bow and arrow whilst still in mid-air, and this feels more like an ‘Assassin’s Creed’ movie than it does anything else. If it weren’t for the title, we might have been persuaded to believe we were watching ‘Assassin’s Creed 2’.

The representation of women in the movie also leaves a lot to be desired. There is only one woman in the entire cast whose character even gets the dignity of having a name; and that would be Eve Hewson playing Maid Marian. In an era of increasingly strong female leads in action movies (what with ‘Wonder Woman’,’Bat Girl’ and ‘Captain Marvel’ all having either made or promising to make an impact within the genre), Hewson’s role is essentially to look pretty, get scared, and need rescuing rather a lot. It looks and feels regressive. Again, if this was a traditional telling of the tale, writing such a weak female lead could be acceptable because that’s how she’s generally represented in the stories. When everything else has been given a modern polish and twist, it seems incredible that she wasn’t given a more empowering role.

Propping up the cast is Jamie Foxx, playing a character who despite being named ‘John’ and therefore presumably substituting for Little John from the legend, is actually a ninja guru who came back from the Crusades with Robin and to all intents and purposes plays Morgan Freeman’s character from ‘Prince of Thieves’. His role as Robin’s mentor is seemingly limited to shouting advice at his protege in montage scenes that ‘Rocky’ would be proud of.

The movie actually starts with a voiceover telling you to ‘forget history’; which is sage advice given that completely forgetting everything you know about history and Robin Hood is the only way an audience would ever be able to make any sense of this film whatsoever. It’s also presumably the same advice that Ben Chandler and David James Kelly gave to each other before they sat down to write the screenplay.

We understand the appeal of turning to Robin Hood as source material. We live in the age of the superhero movie, where audiences are trained to want to see larger-than-life tales of heroism and superhuman ability all the time. Using Robin Hood is much cheaper for a studio than the millions of pounds involved in licensing characters from Marvel or DC Comics, and comes with the bonus of not having comic book fans micro-analyzing every frame of the film to tell you exactly where and how you’ve got it all wrong. But when that source material is twisted almost beyond all recognition, you’re left to wonder what the point was.

Whilst we will always have respect for people who try to bring something new to an old formula, those same people work with the constant risk that bringing that ‘something new’ might spoil that old formula completely. In the case of ‘Robin Hood’, that’s regrettably exactly what’s happened. The ending of the film threatens a sequel. We’d bet against it ever happening.