The Multifaceted Skull Symbol and its Meaning in Jewellery 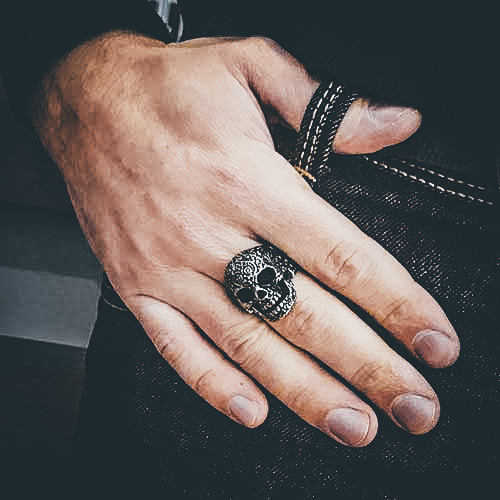 Why do men enjoy wearing jewellery featuring outrageous symbols? It can be a good way to express one’s self or indeed to attract different types of attention. But is it the only reason why we see skulls, skeletons, and other morbid images on their accessories and rings? Maybe these symbols have hidden meanings or some other form of self expression. What are the meanings incorporated in skulls? We are going to take a look at just some of the significance that skulls hold both historically and in modern times.

Skulls have often been used to represent death, but are also interestingly used in many ways to represent life as well. Skulls and bones are often unaffected long after the flesh deteriorates showing that even the laws of nature and time have no immediate power over these iconic symbols. Ancestors used these skulls to represent certain beliefs, even skulls acting as a conductor of eternal life. Believing that if you were to treat them right the holder would be rewarded with a long and healthy life and ensuring resurrection or a place in the after life.

Skulls were revered in many ways throughout many cultures around the world. From the jungles of the Amazon to the towering mountains of Tibet, shamans used skulls within various rituals. Believed to expel diseases and help get rid of curses. Some cultures would even build temples and altars filled with skulls to appease their gods.

Even cultures in more modern times still use this symbol. The biker subculture, for instance, is only around 70 years old but just like many cultures before it, it believes that skulls represent just more than simple mortality, or immortality. It’s a symbol to show commitment to their clubs, their brothers, to motorcycling.

A Reminder of Death

A few centuries ago, memento mori jewellery was at the peak of its popularity. It was jewellery created as a reminder of mortality and the inevitability of death. A life that will inescapably come to an end at some point and a stark reminder that you needed to live it with dignity. It was an iconic token that would prompt the wearer to try and avoid evil. To help them not have to potentially face the consequences of their deeds in the afterlife.

So, skull rings for men can certainly turn into excellent motivators to be a good person. They are a symbolistic keepsake that you can wear with you at all times to help you live your life to the fullest and do good.

Even in this day and age, many people believe that the world is filled with spirits. Some of them are good, and some of them are not. Nevertheless, there are moments when we need to communicate with both of them.

Exorcists, for instance, use the cross and the word of God to drive evil spirits out of the bodies of the possessed. Shamans use skulls for the same purpose, using a variety of types of skull, whether it’s human, animal or crystal, etc.

Mexicans have an annual tradition where they attempt to appease and communicate with deceased relatives on Día de los Muertos (the Day of the Dead). In order to do this they build altars known as ofrendas and place pictures of their relatives on it as well as sugar skulls (sweets shaped like human skulls).

So, a skull ring on a guy’s hand may signify that he may believe in spirits and the after life. It may even be deemed as a symbol of protection against demonic creatures or just a simple commemoration of beloved ones.

A Symbol of Equality

The biker subculture has put many meanings to skull jewellery. This includes equality.

Motorcycle clubs involve those from all walks of life where social status isn’t an important part of their involvement. Some guys are at the top of a social ladder, others are at the bottom. But once you’re a member you are seen as an equal, an equal that has the right to vote and make decisions.

Skulls are the symbol for this the embodiment of equality. They make every person a peer. And in a world with various struggles for equality this simple symbol has helped bring many people together in so many ways.

There are so many meanings and cultural significance to the use of skulls. They are associated with intelligence, hermitage, atonement for sins, the list goes on and on. But the true meaning of the skull is the one you give it. So, don’t be afraid to explore the depths of significance inherent to this ancient symbol.