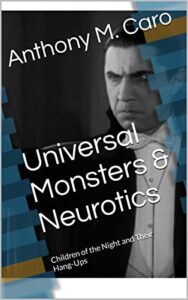 Universal Monsters & Neurotics: Children of the Night and Their Hang-Ups from author, Anthony M. Caro is currently available from Amazon.

“If you asked one of the monsters, “What’s bothering you?” You might get answers like, “I’m centuries out of time” or “I suffer from this or that curse.” The follow-up question could be, “No, come on, what’s the real hang-up?”

The book, at its core, focuses on an essential element to any story: character. What makes a great, memorable, and original character? Characters have goals and motivations. They have wants and needs. None of that stands exclusive to dramas or action films. All good horror film characters have those things, too. Universal Monsters certainly are characters, so audiences might look at their outward motivations and inner needs.

They’re horror characters, though. Something dark goes on inside them.

A few years ago, I wrote an essay titled Frankenstein, the Abused and Neglected Child, looking at how Henry Frankenstein’s neglect negatively affected the Monster. Saying the Frankenstein Monster is “evil” because he’s an artificial construct or has a criminal’s brain ignores so many other things in his troubling life. It is not just the Frankenstein Monster, either. All the Universal creatures have something nagging at them, internally and externally.

I revisited several early “debut” films to see what struck me. I paid attention to the characters, observing from the shadows. I picked up a feeling the “monsters” had a strong human element, and they had human motivations and flaws. Real-world circumstances and human troubles, not supernatural factors, shaped their personalities and drove their behaviors.” – Anthony M. Caro

Is there a human side to the classic Universal Monsters of the 1930s and 1940s? Yes, and it suffers from many psychological hang-ups. Dracula’s lost social status, the Frankenstein Monster’s abusive childhood, The Wolf Man’s inner turmoil, and the Gill-Man’s empty desire motivates their malevolent actions. See the “Children of the Night” all together and explore what terrors lurk after opening the mind’s casket lid.