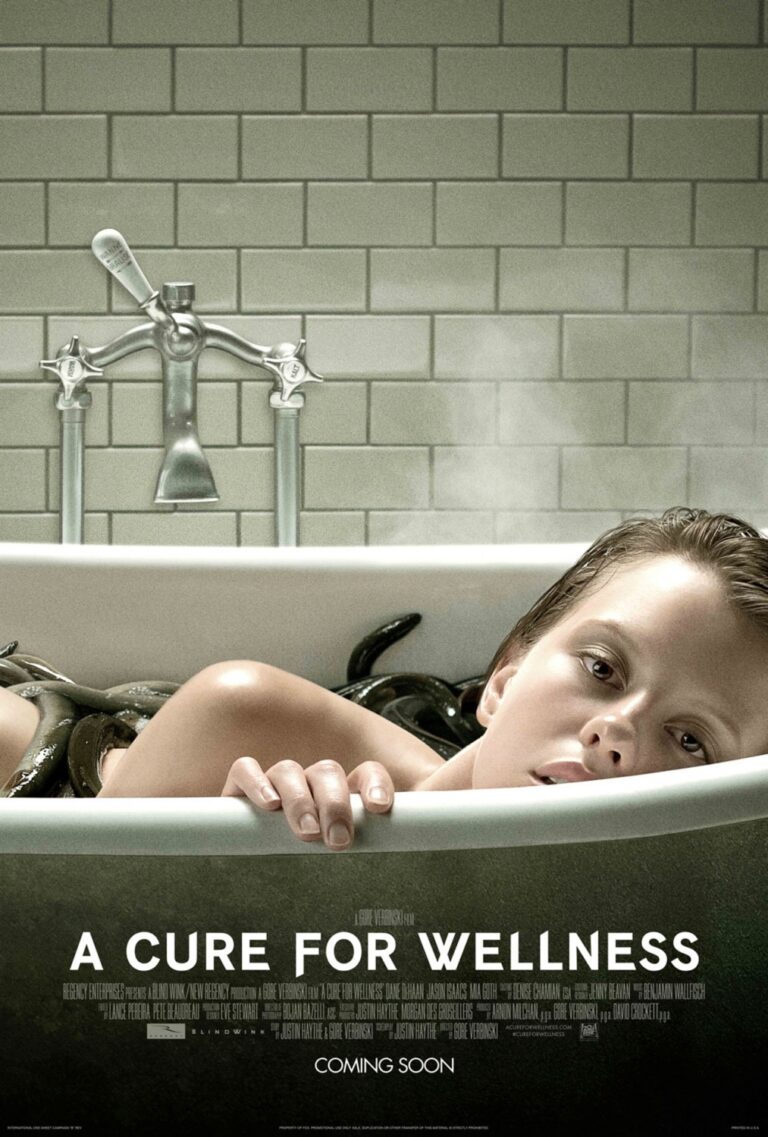 Mid-level corporate sleaze Dane DeHaan’s embezzlement is exposed by the board of directors. It turns out though, that they don’t have punishment or retribution in mind for him. Instead, he’s tasked with tracking down AWOL board member Harry Groener, currently residing in a Swiss ‘wellness centre’ called the Volmer Institute. Groener’s signature is needed for a pending merger, and DeHaan’s failure to bring him back will spell disaster not only for the company but himself. Hidden up in the Alps, the centre’s staff aren’t much keen on letting DeHaan see Groener, and even when he does manage to get a hold of him, Groener insists he can’t leave mid-treatment. So DeHaan leaves, but having gotten into a car accident, he wakes up to find himself now a patient at the Volmer Institute! He also gets to meet Dr. Heinrich Volmer (Jason Isaacs), head of the Institute, and his Shelley Duvall-esque ward Hannah (Mia Goth), who seems child-like in all but physical appearance (and even then she looks quite young). DeHaan decides to get to know her, and find out all he can about the Institute.

In addition to knowing how to make a damn good-looking movie, Gore Verbinski seems to have a thing for psychodramas, and this 2017 outing is probably better than his previous (and not bad) “Gothika”. Don’t get me wrong, I can see why people didn’t like it. It’s at least 20 minutes too long for starters, but I actually liked this one. It’s clever, good-looking, full of dread, and I didn’t even mind the ending, which apparently troubled some.

The early scenes reminded me of a cross between “Wall Street” (but with a Cronenberg-ian chill to it) and “Dracula”, probably intentionally, whilst the finale is very Edgar Allen Poe. We get a really nice sense of impending dread early on, especially through the music score by Benjamin Wallfisch. Typical for Verbinski, it’s an extremely good-looking movie, shot by Bojan Bazelli, with plenty of style and atmosphere. It’s very, very typical Verbinski, albeit with the occasional Kubrickian hallway shot or two. I think it was a clever idea to use wellness centres and cleansing treatments for the purpose of a creepy horror/thriller. There’s plenty of room for suspicion and nefariousness there. While you can see some plot, setting, and genre similarities to Martin Scorsese’s failed “Shutter Island”, this one is clearly the superior work. Although not scary, it’s interesting and weird (without being off-putting), and would’ve been a real winner if it had been 20-30 minutes shorter. As is it’s never dull, it’s simply too much movie, you start to get a bit restless before the climax. The film doesn’t feature any superlative performances, but Dane DeHaan (a cross between Leonardo DiCaprio and Edward Furlong), Jason Isaacs (perfect casting), and smarmy “Buffy” actor Harry Groener are all solid. Hell, I even like the poster (the one with co-star Mia Goth in a bathtub).

OVERALL SUMMARY
The kind of film that I’m sure will be someone’s favourite film of the year, even if it’s not mine. I liked it, though. It’s good-looking, creepy, well-scored, well-acted, and interesting. Even though it has clear influences it doesn’t rip anything off, and Verbinski certainly knows how to make an atmospheric psychodrama. I just wish it were 20-30 minutes shorter. It really does hurt the film a bit. Still, this is a little underrated.