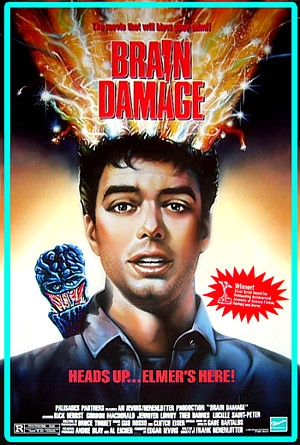 A parasite in Rick Hearst’s brain causes him to murder people to feed said parasite (which talks and is named Aylmer) with human brains. Hearst, meanwhile, wakes up each time with no memory of the killings, and generally freaks his girlfriend the hell out with his bizarro behaviour.

Someone’s gonna love this movie. I’m not it, but I can tell it’s the kind of thing that likely has a loyal following. I saw filmmaker Frank Henenlotter’s bizarro “Basket Case” when I was young and haven’t felt a desire to subject myself to it since. Once again, I’m aware there’s an audience for it, but I, neither then nor likely now would be within that audience in the slightest (Not that I can remember anything other than seriously disliking it). This bleakly humorous 1988 ‘body horror’ flick from the writer-director is…certainly better than I remember “Basket Case” being. I’m still not going to watch it a second time, but I can’t say I hated it.

When you get right down to it, the whole thing is a bit of a penis joke leading to a pretty objectionable oral sex-based murder. Don’t get me wrong, it’s probably too juvenile to even take all that much offence to it all, but still…c’mon. It’s not even a terribly funny joke, let alone one worth stretching out to feature length. Even if you’re curious to watch a film about a guy who talks to a grey penis that kills people, well the Blaxploitation film “Soul Vengeance” (not a very good film, either) did much the same thing a decade or so beforehand. So it’s not even original, really (Yes, I know here it’s a parasite and not a penis. Watch the film and tell me it doesn’t look like a grey penis, though).

Still, someone will love this. For me, I liked the music score by Clutch Reiser & Gus Russo, and there’s a few fun gory/weird moments, but there’s five minutes of genuine material here stretched to about 90 minutes. I found it tolerable as a curio, but like I said, I’m not watching it a second time. It’s just not my thing, really. I did like one funny gore bit though, where the main character (played by subsequent “The Bold and the Beautiful” actor Rick Hearst in his debut) has a nightmare about picking something out of his ear and blood comes pouring out. Other than that, I was a bit ‘meh’ about the whole thing, and the performances are wildly uneven. Hearst probably fares best, so it’s no surprise he’s the only actor I even recognised here.

It’s not for me but if you’re a Frank Henenlotter fan or a stoner, you can bump the rating up a star or two. You might consider it a cult classic. I didn’t get much from it, though at least it was relatively tongue-in-cheek, which helps. I bet filmmaker David Cronenberg loves this movie, it seems to have his love for ‘body horror’. It’s strange but not completely terrible.