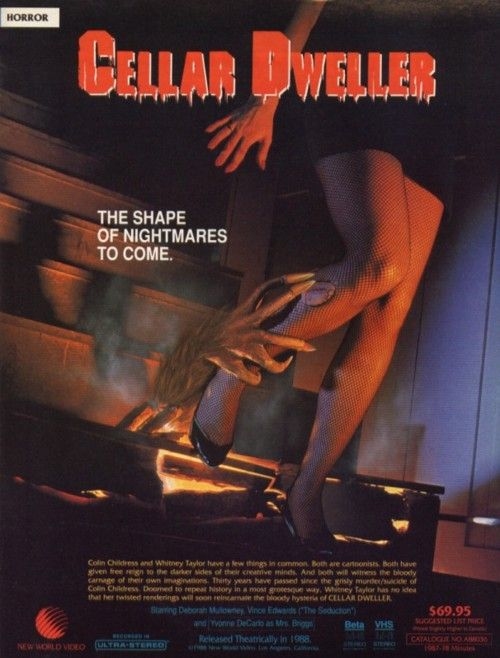 A prologue sees a comic book artist (Jeffrey Combs) do battle with the hideous monster he created on the page that has magically come to life. Decades later we meet another comic book artist (Deborah Farentino) who has come to the same location, now a place for artists of varying disciplines. It’s overseen by the humourless Mrs. Briggs (Yvonne De Carlo). Farentino, working down in the basement begins work on a new horror-themed comic book, and well…you figure it out. Pamela Bellwood plays a rival artist to Farentino, Brian Robbins a seemingly nice painter, and Vince Edwards plays a former private dick turned wannabe crime fiction writer.

I saw this 1988 horror flick from director and noted FX/makeup guy John Carl Buechler (director of “Troll” and “Ghoulies III”) as part of a week-long TV showing of supposedly ‘bad’ movies (The notorious “Troll 2” being among them). Scripted by a pseudonymous Don Mancini (the brilliant “Child’s Play”), I have to say I don’t think this is a bad movie at all. It’s cheese and I like cheese, it’s just not terribly memorable cheese. Like a lot of Empire Pictures, it’s got more gore and nudity in it than EP Charles Band’s offerings on other labels (Full Moon Entertainment etc.), but I can’t quite recommend it still. Any film that confines the inimitable Jeffrey Combs to a mere Lovecraftian prologue cameo has an uphill battle with me. That man’s just too talented to be so confined and wasted. Personally, the Lovecraftian prologue suggests a better movie would’ve been made out of that.

We get a good music score by Carl Dante (who worked on two glorious-sounding exploitation films “Slave Girls From Beyond Infinity” and “Cannibal Women in the Avocado Jungle of Death”), and perfectly fine performances by Deborah Farentino, old pro Yvonne De Carlo, and especially a well-cast Brian Robbins from TV’s underrated “Head of the Class”. On the downside, Pamela Bellwood is mediocre, seeming to think she’s on “Dynasty” or something. Her final scene is hilarious, however. Vince Edwards’ wannabe Raymond Chandler character never convincingly fits in with everyone else, either. Also preventing the film from being more enjoyable is that nothing horrific happens for at least the first 35 minutes or so.

The giant monster, when it shows up is quite good for a not terribly high budget film. Say what you will about Charles Band flicks, I think they at least excelled at low-budget FX work above all else. We get one really brilliant decapitation, and I love how Buechler doesn’t even try to explain how such a big monster appears out of nowhere in pretty confined spaces. Also unconvincing are Farentino’s sketches, with the initial work never remotely resembling the finished product. That’s not a complaint, just an amusingly cheesy observation. This is schlock, and pretty OK schlock at that.

Fairly standard Empire Pictures horror film, though with decent music score, cinematography, production values, and even some of the acting. It's nothing memorable, but it's relatively watchable if you're undemanding. I'd take this over "The Dungeonmaster" or the first "Ghoulies" film any day. It's on "Puppetmaster" level of competence and entertainment value at the very least. Total waste of the inimitable Jeffrey Combs, however.