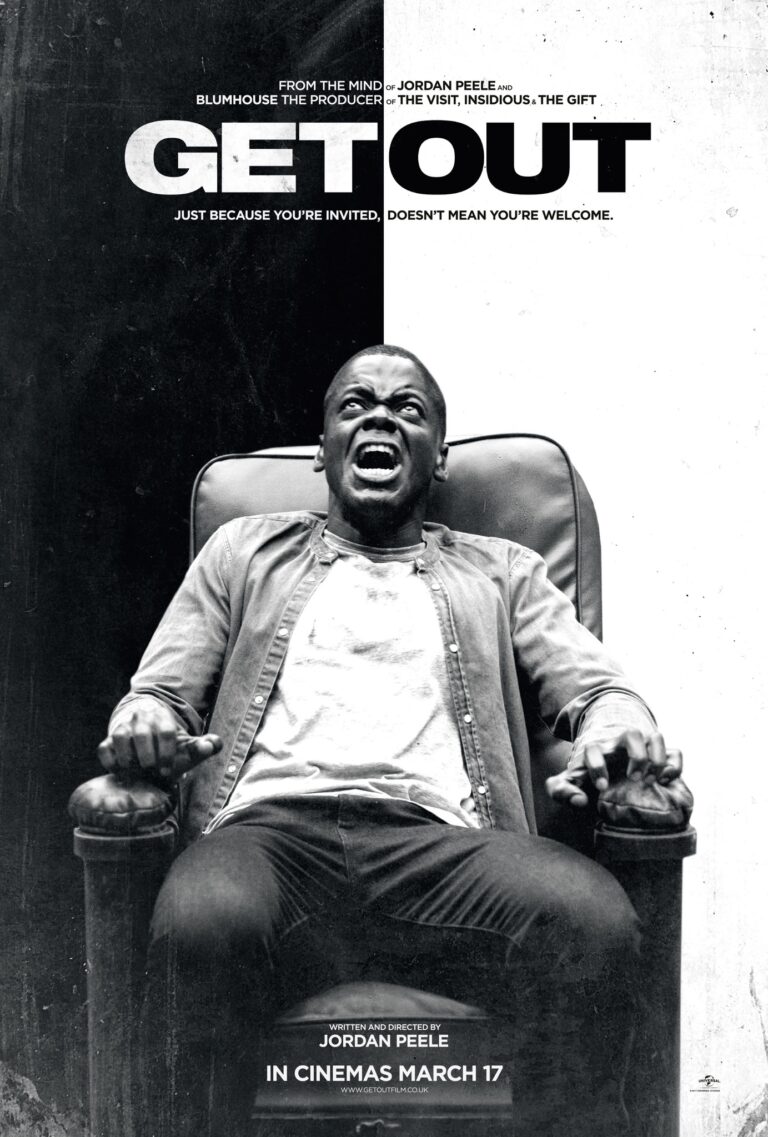 Daniel Kaluuya and his white girlfriend Allison Williams are heading back to her hometown to spend some time with her white Liberal parents, played by Bradley Whitford and Catherine Keener. They’re ingratiating, progressive-thinkers who would’ve liked to have voted for Obama a third time. However, they also have two African-American servants on their property, servants who behave oddly whenever Whitford and/or Keener are around. Kaluuya feels strangely uncomfortable, especially when meeting the rest of the predominantly white townsfolk, who although outwardly accepting and cordial, seem…oddly unconvincing…vaguely menacing, even Stephen Root plays a blind artist, and Lil Rel Howery plays Kaluuya’s friend back home, who starts to worry about his buddy amongst all those white people.

Although baffled by the Best Original Screenplay win at the Oscars for writer-director Jordan Peele (his debut directorial effort), I can certainly say this 2017 supernatural flick is thoroughly entertaining. It’s not exactly scary and it might not entirely live up to all that hype(rbole), but it’s certainly completely whacked-out, off-the-wall, interesting, and clever. I don’t think there’s been that one great African-American horror flick yet (“Blacula” sure is fun, though), but this is a good one, certainly.

Neither Daniel Kaluuya nor Allison Williams are outstanding, but they’re likeable, which might be more important, really. I’m always crapping on about how there are too few likeable characters in modern horror, after all. I will say for Kaluuya though, that he can certainly project both sadness and terror effectively, whilst Williams is certainly well-cast. However, Catherine Keener and Bradley Whitford are immediately perfect as outwardly nice, seemingly progressive liberal white folk. However, once you notice that this supposedly progressive couple employ solely African-American servants…you know something’s wonky here. They give an explanation for it of course, but it’s not a convincing one. When you notice that the servants rarely talk around their employers and look zonked-out, you have to wonder why Kaluuya doesn’t just get the hell outta Dodge. Of course, then there’d be no movie and wow, what an insane movie it is, too.

I was really impressed with the hypnosis scene, an effectively creepy scene that I didn’t know Peele had in him, and more importantly it’s unlike any other such scene you’ve ever encountered. It’s easily the scene most closely tipping over into horror, as well. Although not a comedy, there’s definitely some bleak humour, as well as a funny performance by Lil Rel Howery as Kaluuya’s conspiracy nut friend. Although he’s arguably the most “Key and Peele” (a show I loathe) character in the film, he’s hilarious and apparently ad-libbed much of his own dialogue. Stephen Root has an interesting supporting role, too. In regards to the darker comedy, Peele is clearly poking fun at white liberals here, though I think some people have strangely taken his pot-shots seriously, which I don’t think was the intention at all (Peele has a white mother, for what it’s worth). There’s an especially funny bit where an old couple ask Kaluuya if he plays golf, and mention that they love ‘Tiger’. These creepy white people seem to want so badly for Kaluuya to know that they’re not racist, which makes them seem even more suspicious. However, that’s not even half of what’s going on here, trust me. It’s way more messed up than that. Peele sets up this wacky worldview really well, and also manages to blend the humour and thrills in a manner that doesn’t feel lumpy or awkward, which is no easy thing. Some might see where it’s going fairly early on (especially if you know your 70s sci-fi/horror flicks), but I have to admit I was surprised from time to time by it.

Is this overrated? Yeah, it certainly is. However, it's still a good and original supernatural thriller, with elements of horror, racial commentary, and dark comedy. A surprisingly mature effort for TV sketch comedian Peele in his first filmmaking endeavour. I don't love it, but I can appreciate why many of you do. It's good, it's original, and it's really interesting.