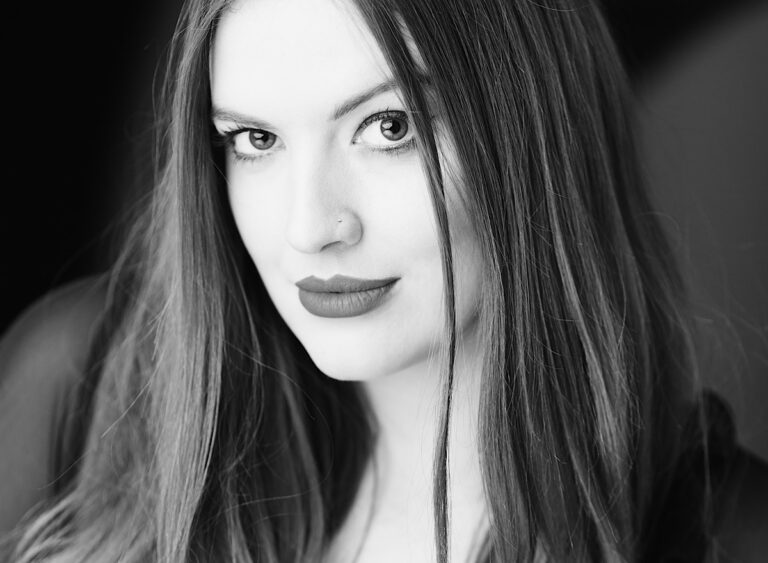 British model/burlesque performer Anna Sawyer has made her screen debut as a killer nun in the new live-action adaptation of the Rose Black graphic novel series. The statuesque performer plays a lethal, habit-wearing assassin – the part being a tribute to Anita Ekberg’s character in the 1979 nunsploitation thriller, Killer Nun. We asked the London-based actress about her time performing this malevolent kind of sister act.

How much fun was it playing a gun-toting, fist-slugging, super-powered killer nun?
It was outrageously fun. I’ve always loved how extreme the action is in comic books and graphic novels, so I had the most wonderful time playing such a fantastically violent bad guy. Add the fact that I went to a Catholic Convent High School, the idea of playing an evil nun character was something very close to my heart.

The Killer Nuns appear briefly in the first graphic novel, but their background isn’t explained. How did you envisage how your nun character would be played on screen?
I based my character on the real nuns that I’ve known throughout my life. I’m sure that the ones at my school weren’t actually dangerous murderers, but when you’re a teenager getting in trouble with one, that image doesn’t always seem so distant. I feel like nuns are always surrounded by so much mystery. What do they really think? Where did they come from? Their personalities are so hidden by their clothes and conduct that I’ve always relished in the idea that they could be hiding anything; that everything is possible. Through this way of thinking, the jump to gun-toting, fist-slugging, super-powered killer nun isn’t too much of a leap. I really hope my old school nuns aren’t reading this.

You tower over everyone and look quite powerful and imposing, particularly in the fight sequences with Rose – did you have to wear heels under the cassock, and did you work out for the role?
I’m 6ft tall so I just wore flat shoes, and since my cassock was so large and shapeless, I didn’t really need to work out to tone my body, only to improve upon my fighting skills. In my every day-life, I’m a lingerie model and burlesque performer so my uniform usually includes super high heels, corsets and stockings with a full face of glamorous makeup. The stone-faced nun look was a vastly different look for me, and it was beautifully refreshing to take on such a different persona. It was also wonderful to put so much focus on my height and actually use it to appear imposing and scary.

We’re told there may be a little more of your character in the future. Do you know how that’s going to turn out, and if not, how would you like it to turn out?
I’ve heard a little about where my character will go from here, and while obviously I can’t say too much about that, I can say that it’s super exciting. One thing that I’d enjoy seeing in my character is a complete lack of remorse. I’ve no idea of which direction she’ll go in terms of feelings of contrition for her terrible actions, and there’s definitely been a rise of hearing the ‘other side’ of the bad guy in media lately, but I’d really love her to just literally never start caring. I feel like there’s something really poetic about the image of a completely brutal, un-merciful nun. Although, of course, there are always other motives behind the characters that we don’t know about yet. Maybe she genuinely believes she’s fighting for the greater good.

Rose Black is certainly a different take on traditional vampire stories – have you been a particular fan of vampires in film and TV, and if so, what’s your own personal favourite?
I LOVE vampires in film and TV. A few years ago, I would have said that my favourite was Blade, but honestly right now my mind is going straight to Buffy. Although I did watch Leslie Neilson’s Dracula: Dead and Loving It over Christmas, which was amazing. It’s been fascinating to see the evolution of vampires in media as they become less scary and sexier. I really love Rose Black in that sense. It brings it back to the action and danger that used to surround vampires a bit more, whilst still being super sexy, thanks to the divine Lily (Catalifo, who plays Rose Black) and the wardrobe designers. We also channel Buffy through the whole fantastically strong female lead thing, although obviously there’s the difference of the lead vampire being a good guy fighting against the evil humans. There are always tons of beautiful connections between different versions of monsters in film and TV, and I think vampires are the most poetic. In the film, Bram Stoker’s Dracula, he only became a vampire in the first place because his wife died while he was fighting in the Crusades and he was so heartbroken that he denounced his religion entirely, causing him to become a demon. The entire reason for his becoming this creature stems from both his dedication to religion and his love for his wife. This is why I feel that vampire stories with religion playing a heavy part will always hit harder, and why I feel that vampires are one of the most emotional and strongly feeling monsters.

You’ve been a model and now you’re a burlesque performer – has any of that helped in your move into acting?
Absolutely. It’s all a performance at the end of the day. Altering your appearance to fit a certain role, acting a certain way to put across the feeling and vibes that you want to create. Both modelling and performing on stage require you to act and look a certain way, even if you’re not especially feeling it at the time. They’ve really helped me develop not only the skills to basically act my way through anything, but also the belief in myself that I’m actually capable of doing so. I’m super grateful for the opportunities to explore these different sides of myself through the different aspects of my work. It’s been a dream to embrace the sexy, glamour-puss side of myself at the same time as this wonderful action-filled, completely un-glamorous character of the killer nun in Rose Black. If you’re curious about how I live my life when I’m not rocking the nun’s cassock and handgun, then go and find me under my burlesque name LadyGingerLust.co.uk

It’s a difficult time for performers at the present – due to Covid-19. Do you have anything planned for the future?
It’s been super difficult, but in terms of work I’ve never really focused on one thing. I like to explore and drift around, so while this has been basically impossible during lockdown, I’ve luckily been able to adjust myself and my interests towards something that can support me during this weird time. I’ve really missed performing burlesque on stage, but I’m using this time to polish up my current acts and work on some new ones. So I’m really confident that once things open up again, I’ll hit the ground running. I’ve been mainly modelling on a certain subscription site and it’s created a whole new life for me which I’ve completely fallen in love with. I don’t want to just drop that when lockdown eases up. So, I guess in the future I’ll just have to figure out a way to balance it all.

A huge thank you to Anna for taking part in this interview.
And we wish her the very best of luck in the future.

The Rose Black series pilot episode – Exodus – is available to stream at https://vimeo.com/ondemand/roseblack