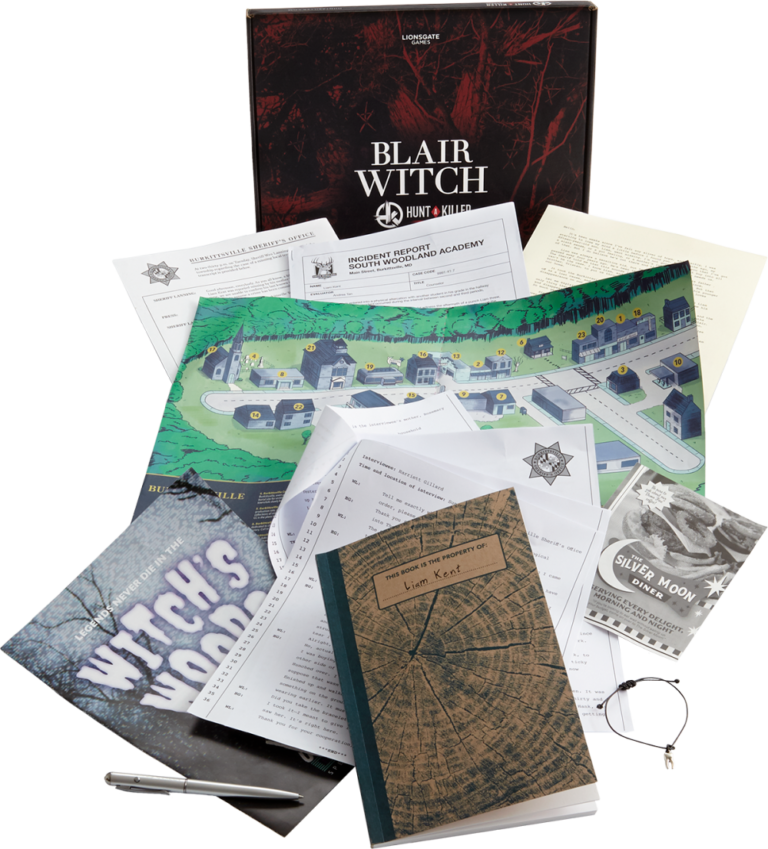 With that beloved date looming everyone is understandably concerned about just how this years Halloween celebrations will take form. The pandemic has impacted much of the year and it doesn’t appear that October 31st is likely to escape either with those all over the world already setting up alternative plans. However, even if your trick and treating adventure this year has to be cut short or sit on the back-burner until 2021 we can take solace in the fact that horror can still very much be enjoyed in the comfort of our own homes. We’re not just talking about simply putting a good horror movie on – we’re talking about a whole new immersive home horror experience to enjoy.

Hunt A Killer, the guys behind the highly popular murder mystery game, have teamed up with Lionsgate Game to bring you the impending arrival of an exciting new horror subscription game, one which will allow players to get lost in the Black Hills Forest. That’s right! Their new game is based right in the middle of the Blair Witch cinematic universe allowing you to experience the legend of the Blair Witch like it never has been before, in this narrative-driven psychological game. Now what better way to spend your Halloween evening this year?

It’s been 21 years since the release of “The Blair Witch Project”, a movie that was so successful it helped carve out a whole new way of not only shooting horror movies but marketing them as well. It already has a couple of sequels under its belt and no doubt this will be the perfect accompaniment to the franchise and for fans of the movies whilst this time allowing you to really get involved with the action in this tabletop role-playing game set in that terrifying world.

Each “season” of the subscription is made up of 6 boxes or “episodes”, with each of the received boxes filled to the brim with realistic evidence, maps, police reports, clues, documents, ciphers and other pieces of useful information. All of which not only bring you into an horrifying immersive experience but also require your detective-like skills to solve a mystery. Each box is delivered to your door and will need to try and piece things together, discover audio recordings and solve unsettling puzzles as you go. As each box arrives the story will expand and unfold as you complete each “episode”.

Hunt A Killer’s original murder mystery game already has 100,000 active subscribers and we’re certain with this new horror adventure that will see players return to Burkittsville they’re going to bring a lot of fear to a lot of homes. And we’d love to hear how you get on!

Here is the main synopsis for the game:

“Rosemary Kent, a woman who lives on the edge of the infamous Black Hills Forest, needs your help to find her missing son. To reunite the Kent family, you must investigate the mysterious forest yourself. Will you face down the horror of the Blair Witch and those who serve her?”

For more information and to sign up for early access please visit: Hunt a Killer: Blair Witch Game