Bayview Entertainment releases The Unsung DVD on 13 October and The Citizen DVD on 27 October.

In an old industrial town, a homeless man (Eric) roams the streets, looking for a place to rest when he comes across a young girl in danger. He runs to her aid and as a kind gesture she leads him to a homeless village where he is inspired by the friendships he makes there.

Through newspapers and radio, Eric learns about a series of murders taking place in town. Inspired by the comic books he reads, Eric creates an alter ego and attempts to get involved with the search for the killer, running afoul of the lead investigator, Detective Jones.

Pre-order The Unsung on DVD at Oldies.com 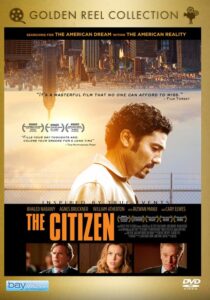 Yearning to leave behind his life of misfortune in the Middle East, Ibrahim Jarrah wins the U.S Green Card Lottery for a chance to become an American citizen. He lands in New York City the day before 9/11 and the events of the September terrorist attacks forever shape the struggles he faces on his journey to capture the American dream. Inspired by true events, filmmaker Sam Kadi’s feature debut is a gripping tale of courage, love, and perseverance, the qualities of a true CITIZEN.

Pre-order The Citizen on DVD at Oldies.com

About BayView Entertainment
BayView Entertainment, LLC, is a full service media company committed to acquire, develop, produce, market and distribute audio-visual content. For over fifteen years, BayView made its name by being dedicated to releasing only the best programs in each category from some of the most trusted names in the field.

BayView’s disc programming can be found throughout the country at all online suppliers plus fine brick & mortar retailers, as well as streaming/video on demand at all major digital retailers and platforms.