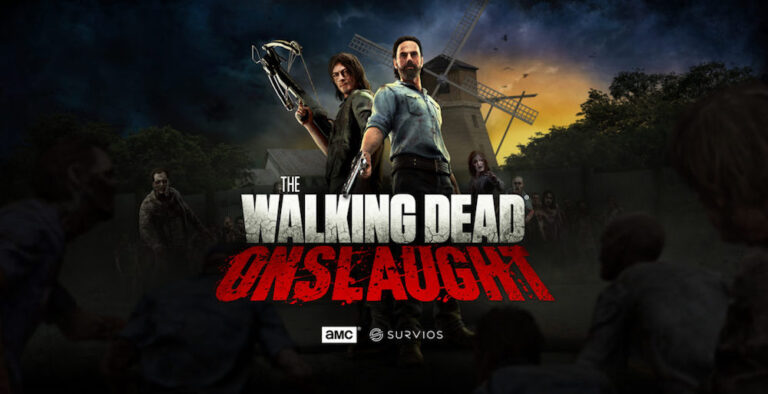 I bring you my thoughts on The Walking Dead Onslaught, a brand new VR zombie killing experience out today!

The Walking Dead is easily one of the most popular horror franchises over the last decade and developers Survios have collaborated with AMC to bring some of your favorite characters within this VR experience.

Rick, Michonne and Daryl all appear in VR wonder as you spend most of your time exploring the detailed environments.

Granted the environments aren’t as visually appealing as those in Saints and Sinners as it feels as though Onslaught dials almost everything back for a good old fashioned smash and grab type game.

After an initial tutorial allowing you to get to grips with the controls, you can follow a story-driven campaign or head off on Scavenger hunts.

The second Daryl appeared on the screen I jumped into Chapter Seven on a scavenger hunt and completely missed out 6 previous chapters. A glitch? A noob mistake? Who knows, but I headed off on a hunt to try out my newly learned skills.

The movement within VR really gets me, my character is moving forward whilst I’m standing still and after a good 5 minutes of gameplay my headache gets so strong I’m pretty sure I’m developing superpowers.

Thankfully there is a transport mode that allows you to stand still and jump forward to another location thus making the whole headache-inducing movement more tolerable.

This movement also happened to be my downfall as I kept transporting too close to zombies for them to chow down on me as though I was a twinkie being catapulted towards their biting mouths.

Within the walls of Alexandria you can build things, upgrade your weapons and more but that’s about it. There’s no interaction as such you’re confined to your space of choosing between weapons and building stuff and the rest is just collecting items and killing zombies within hunts/story mode.

Ditching a good majority of gameplay for action as you hack, smash and shoot zombies to your hearts content.

Whilst seeing zombies arms quite literally dropping off is quite hilarious the first time it starts to wear thin as the game goes on that’s all you seem to be doing throughout the entire game. It wears a little thin after a good few chapters.

Norman Reedus was enlisted to help with the game and lended his face and voice to proceedings. Sadly other characters have completely different voices and this somewhat alienates my inner fanboy as it just feels like a bromance road trip of zombie slashing proportions with Norman Reedus.

As you can grab zombies by the throat and throw them around, or go for a quick grab and stab these provide moments of enjoyment for a horror nut like myself but that’s about it.

Your blade never wears out, there’s enough ammo dotted around the maps to make you think you were in an Army base and at no point is there a real danger or threat.

There’s nothing remotely scary and there’s no urgency to survive, unlike Saints and Sinners.

It’s by no means a bad game but it’s a long way from competing with this year’s earlier Walking Dead release.

Thanks to XP-VR in Hanley, Stoke on Trent for inviting me down to check out the game on its debut release date!

It's certainly fun the first couple of games but suddenly the mechanics and the sheer joy of choke slamming a zombie before driving a knife into its head quickly gets old and rather boring.

Ditching story and detail for sheer zombie-killing thrills Walking Dead Onslaught is certainly fun for a short while but doesn't compare to the immersion, detail or combat dynamics that Saints and Sinners holds in spades.

An Interview with Pollyanna McIntosh