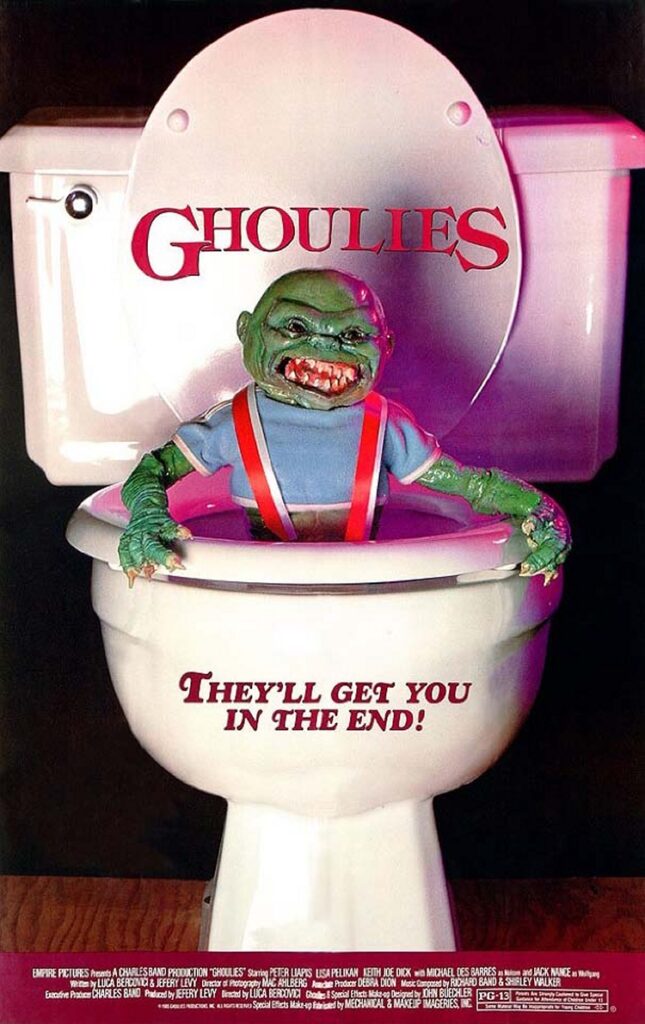 Peter Liapis inherits the estate of his late Satanist father (Michael Des Barres), and thinks it would be fun to invite some friends over for a nice Satanic ritual. A few conjuring words later and he has summoned up the title vicious little beasties that run amok as Liapis descends into power-driven madness. Lisa Pelikan is his unhappy girlfriend, whilst among the ‘party’ guests is a young Mariska Hargitay. Jack Nance turns up as a local crazy old guy named Wolfgang.

The best and only decent “Ghoulies” movie is the one with the W.A.S.P. soundtrack and lots of scenes with the Ghoulies. That’s “Ghoulies II”, but we’re not here to talk about that, though. This 1984 horror pic from director Luca Bercovici and his co-writer Jefery Levy comes from Charles Band’s company Empire, with John Carl Buechler (“From Beyond”, “Demonic Toys”, director of “Ghoulies III”) in charge of the Ghoulies design. Looking back on this film, it comes across like a poor dry run for what Band’s later Full Moon Pictures company would have as its stock-in-trade. In other words, the Charles Band formula hadn’t quite been ‘perfected’ yet. A big issue is that there’s scant scenes with the title characters (low-rent, blood-thirsty “Gremlins” knock-offs), which are the reason for the film’s existence, surely. Instead we’re subjected to a bunch of the dorkiest ‘cool’ kids you’ve ever seen, including a pre-stardom Mariska Hargitay (looking hot) and some pretty dorky white guy breakdancing. Trust me, these goofy stoners have never, ever taken drugs. Ever. They’re also incredibly boring. You almost wish rocker/actor Michael Des Barres (AKA the poor man’s Billy Idol) were around more. He’s terribly hammy (and then some), but it’s surely meant to be that kind of film and at least he’s bringing the right kind of porcine flavour to proceedings.

It starts well, with a memorably yucky but spectacularly silly bit of devil-worshipping and demon-summoning by Des Barres hamming it up to high heaven. Jack Nance is a welcome sight early on too, underplaying as usual. Yeah OK, so he doesn’t know the meaning of the word subtle, but bless him he’s fun to watch rocking a sweet beard and overall ‘Crazy Ralph’ demeanour. Much less fun to watch, and sadly on screen far more often, are Peter Liapis and Lisa Pelikan. Liapis, who looks like a cross between Dermot Mulroney and Eric Roberts, and gives a performance so ludicrous that makes Eric Roberts look like a master of understatement. Pelikan is also terrible, and the scene where she falls down the stairs is one of the most unintentionally hilarious things you’ll ever see.

Although the rest of the FX are a miss, the Ghoulies themselves are fun and well-done for the time and budget. They’re suitably disgusting little buggers. The best thing in the entire film is probably Richard Band and Shirley Walker’s openly nostalgic score (very 50s and 60s-inspired despite the synth), which even references “Psycho” at one point. It’s a lot of fun, no matter the quality of the film itself. There’s also a cool tongue strangulation scene at one point. Other than that, I think most of Band’s “Puppetmaster” series is better than this. A lot better.

Too many boring humans and not enough focus on the title characters. A pretty humourless approach doesn't help, either. Very mediocre stuff that is very weird, but not in a particularly enjoyable way.