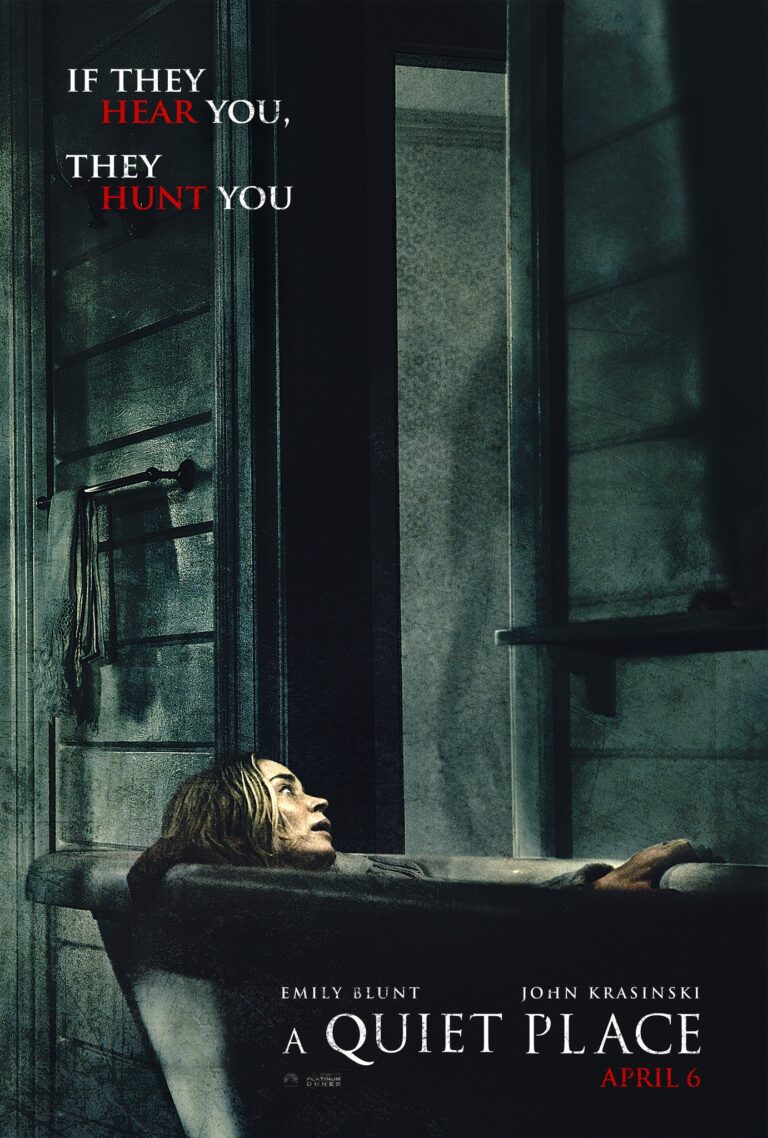 A couple, Evelyn (Blunt) and Lee Abbott (John Krasinski) are returning from raiding an abandoned shop in a deserted village. They seem to be the last family left alive in their deserted rural community, and head home, accompanied by their two young sons and one tweenage girl, they speak in sign language and terrified “shush” hand gestures, as it become painfully obvious there is something after them tracking them by sound. One noise…and you’re dead.

For the first almost silent fifteen minutes, the reason for this noise-out becomes clear, as their youngest boy is eaten alive by insect like monsters on the way home. These massive insects a fatal cross between Cameron’s Alien and Starship Troopers’ killer bugs, patrolling the local area, drawn to any sounds above a whisper that they make. This explains the fact the family have created sand paths everywhere they have to walk, to muffle footsteps; why they eat from plant leaves rather than plates; why they play board games with segments of peel.

The movie forwards to just before Blunt is due to give birth, when the family is most vulnerable. It seems fairly unlikely that a couple would decide to have a baby in a world now minus medical care, where you have break into a deserted chemist to get any types of painkillers. No one seems to have given much attention to how much noise the baby is going to make and turn the entire family into an insect snack.

The couple desperately keep the family on the rails as the tween-age daughter Regan (played by Millicent Simmonds). The daughter Regan, who is profoundly deaf, starts to rebel against the strict control of both parents. Screenwriters Bryan Woods and Scott Beck could have speeded up the pace a bit towards the film’s centre. Emily Blunt could have had a more active role and is slightly wasted in her role of pregnant mother, with her (real life) spouse John Krasinski who also directed. The plot never really tackles that either.

As in Cameron’s 1979 original, the aliens are hardly ever seen, and then only a claw or tentacle, hidden in a corn field or creeping down a stairway to the family’s hideout. With an enjoyably gungho ending making up for the slow pace, this is a movie worth shutting up for.